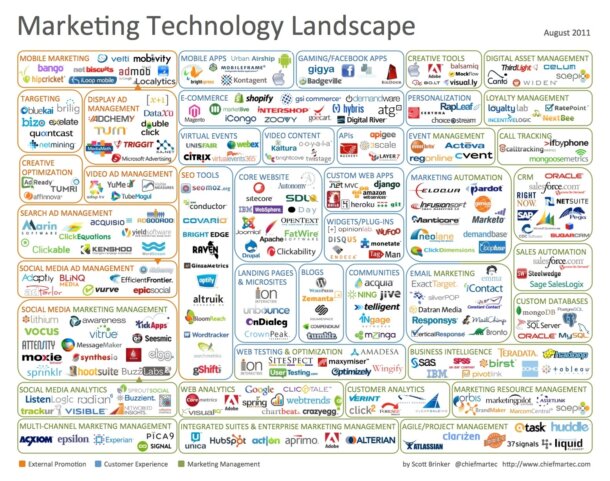 Rise Of The Digital Marketing Suite – Part II (Who Are The Players?)

In Part I of our series on the rise of the digital marketing suite we laid out specific categories that the CMO was buying in. We see 6 major buckets that CMOs are looking at spending money in and think most of today’s categorization can be broken down into those buckets. For my second post on the landscape it is important to understand “who are the players that are offering these products to CMOs and trying to access budgets?”

Sticking to our 6 categories:

Analytics – Adobe, Oracle, Microsoft and IBM are constantly involved in the discussion in this category. More independent vendors like WebTrends, SAS Institute, ComScore, AsterData, Yahoo!, Google, Infor, WPP, Nielsen/NetRatings, and Aprimo have also been very active in the category over the past several years.

Content Management (CMS) – Adobe, Oracle, Microsoft and IBM are also involved in this discussion in a big way. Salesforce is a recent entrant into the discussion and independent vendors like HP, Acquia, Drupal, OpenText, Joomla!, Alfresco, WordPress, and CoreMedia are also a part of the conversation.

Social – The big 5 (Adobe, Oracle, Salesforce, Microsoft and IBM) are major players within this area and continue to build scale and depth in the category. Visibile Technologies, Lithium Technologies, and Google are also a part of the conversation as the independent vendors in the space.

Marketing Automation + SEM – Again the big 5 are all active in this category but there are a fair number of large independent vendors that have had success in recent years selling to CMOs including Marketo, HubSpot, Efficient Frontier, Marin Software, Google/DoubleClick, WPP, SearchForce, IgnitionOne, Criteo, Kenshoo, and others.

Campaign Management / Email Marketing – The big 5 have a number of solutions in the category as well as independent vendors like YesMail, StrongMail Systems, Constant Contact, Experian/CheetahMail, and Epsilon.

Note that these lists are not exhaustive and are more a display of the world as we see it talking to many CMOs who buy these tools. The list is also not broken out by largest player to smallest player from a customer or revenue standpoint but I plan to do that in a later post as well as touch on some of the most interesting start-up companies in each category. One of the key takeaways is really that there are 5 major companies that have built a huge presence in accessing the CMO, with IBM having the greatest depth of product suite in the category. Now that we have the categories that matter as well as the players that are in it for Part III I will discuss how each of these players got to where they are and how they are positioned.