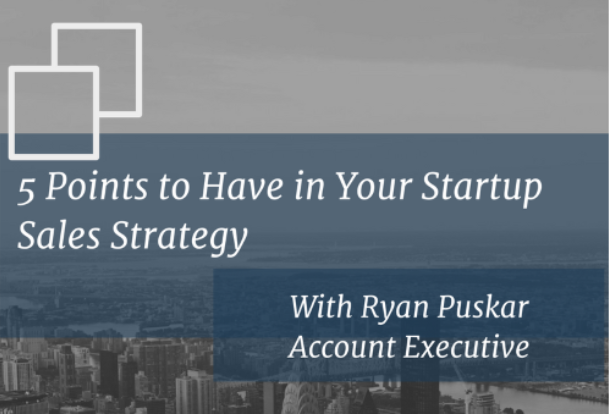 For the second edition of The Bowery Capital Sales Leaders Series, we have Ryan Puskar from ActionIQ with 5 points to have in your startup sales strategy.

Early enterprise startup sales strategy is no easy task. Funny enough, when I started to think about key lessons that could be helpful to share, it became pretty clear to me that so much of what I’ve taken away in the recent past only applies to a small subset of salespeople or teams – enterprise startups that are less than a few years old, who are selling products that are over $300K ARR on average. Also, I feel that I should note that these are not just things you should do, but things to continually keep in mind as you build out your team, talk to more prospects, and get your first customers. In no particular order, here are a few things I feel I’ve learned that are core to the way I think about sales moving forward.

Customers – Talking to customers can easily be overlooked because you have to get new business, but your current customers are the ones who use your product and give you feedback. Listen intently to these people. It will only help you, and it will also help them in the process. One more perspective on how to fix their problems usually adds value if you’re in the business of making them successful. Also, they have a network, and if you’re making them happy, they are your biggest advocates to make introductions, or be a reference for your prospects. And if you’re early on in the process of selling, it’s going to be very tough to bring on new sets of prospects if your current customers do not like you.

Prospects – When you’re a young company, your prospects give you all the objections you can possibly imagine. This is a great thing, so even if you know that a prospect is not a good fit, talk to them. You don’t have to actually sell to them, and 1 discovery meeting usually only takes an hour or two out of your day, so early on it’s definitely worth the time. I can’t think of one past meeting, no matter how bad, where I didn’t learn at least something small. Now obviously the caveat to this is to not just fill your calendar with meetings that you know will be bad, just to be busy. Eventually you will say no, but say yes a lot at first.

Your Team – It’s important to also talk to the people you work with. This is invaluable. As many early sales reps know, your product and your team is a puzzle that’s hard to put together in the first 3 to 6 months on the job. You’re also trying to figure out what the market is saying about your product, so this can be a noisy time. To cut down on the noise, you have to grow your internal perspective of who you’re working with and what they’re working on. The more perspective you have on what people around you do, the more it helps you put the internal puzzle together faster. As new sales reps come on board, make them sit down with as many people as they can and get to know what they do for the company and what they’re working on. This goes from engineering to product to marketing. Oddly enough, a lot of things that end up getting discussed in these conversations actually become part of the sales reps pitch. It’s these nuances and details of many conversations that get copied and pasted into every sales reps brain when explaining the value of the company that they represent and the product that they sell.

2) Set up an infrastructure that forces you to communicate internally

Salespeople usually have a ton of pride, and they hold a lot of their cards pretty close to their chest. When it comes to sharing information and learnings across a team, unless something is set up to force everyone to share these ideas, it probably wont happen. This ultimately lowers the caliber of the team overall, even if the individual members of the team are very talented in their own right. Part of this isolation is because when you learn something new as a salesperson, you don’t feel like you should have to give that away purely to democratize your ‘edge’ on the others. Learning that lesson probably wasn’t easy – it took work, and you probably had to deal with some level of adversity to acquire that information. Giving these gems away makes you feel like you’re giving away your competitive advantage to perform well – i.e. the next guy or girl needs to earn their treasure. But, nothing could be further from the truth in a small startup. Communication is the sales teams currency, and people learning from each other’s deals could immediately be beneficial as soon as that afternoon or the next day. In a group full of pride, when everyone is forced to be vulnerable, the ego between people naturally drops. To do this, set up a recurring meeting about current deals in the pipe. Pick a few deals and talk about what went well and what went sideways, and how to move the deals forward. It will help everyone. A big key to this as well is to have the head of sales, or even the CEO, depending on how big the company is, be a part of these meetings. Everyone will show up and will try to add value in some way.

When you stop worrying that a deal will be done, you’re dead. The harsh reality is that the smallest winds can knock you over at your base when trying to get your product off the ground – so you need to be a little bit paranoid about your approach. Do this without, of course, letting your prospect know that you’re a bit paranoid. You cannot necessarily put your faith in one entry point, or one super ecstatic internal champion who loves what you do, and seems like they’re fighting hard for you. You really have to be going above, sideways, and below – coaching your internal stakeholders the entire time, and getting a big consensus. This might seem like a sales 101, but when you are in the moment, this is very hard to figure out quickly, especially when you don’t confidently know yet who NEEDS to be involved to get signoff for your product. It could be the CTO? It could be the CIO? It could be the VP of engineering? It could be the head of analytics? It could be the head of data science? You just might not know yet who needs to be involved, which can make it hard to coach your champion. You have to really push your champion to find out who the players are, and you have to speak in hypothetical terms with them if things were to progress forward. This is also risky, because someone who doesn’t know you yet, but has influence, could not like what you bring to the table, and could kill your deal. You have to face that adversity quickly, and minimize it quickly. This goes back to knowing really well the personalities on your team, because you’re going to have to line up the right players on both sides, and usually you’re straddling the business and the tech sides at the same time. Keep digging and do not get excited when you hear your prospect say ‘we’re going to get this done and I can’t wait to have you guys in here.’ Even if this is the economic buyer for your deal who signs the check, that often won’t be enough.

Being at an enterprise startup will have its peaks and valleys in terms of how you’re feeling about what you’re doing. These ups and downs don’t usually last an hour and then you’re better – it’s more about peak weeks, and valley weeks. This is something that you get very used to, and learn to not pay attention to at all. You’re just going to have a bad week here and there for different reasons. For sales, these up and down weeks can very much be tied how your deals are moving, or not moving. If you’re early, you’re most likely going to lose deals. It’s probably better that you know that in the back of your mind going in. However, It’s absolutely not okay to lose them. It’s important to both learn from your mistakes and take your loss to heart, while also not dwelling too long and moving on to the next challenge.

You usually have high attention, low action people. Or, low attention high action people. For the first few people who are selling your product, you want high attention, high action people. It makes for a better combination overall, because your reps have to be extremely curious about how things are built and work, but also into acting quickly with sales motions. I think finding these types of people creates more momentum for the team on all fronts, and creates more learning for everyone across the board.