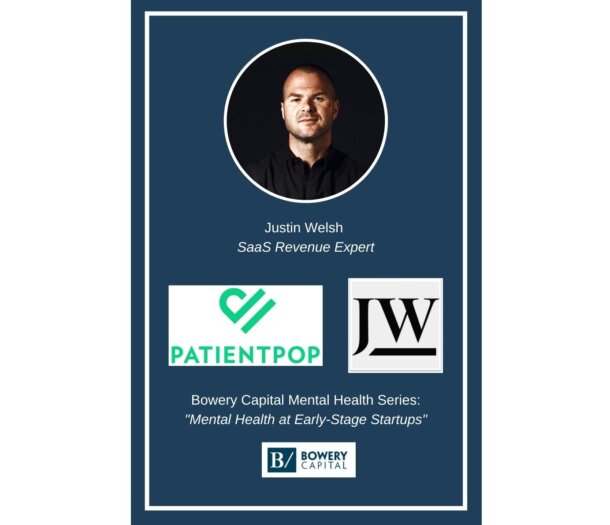 Welcome to our second installment in our series on mental health at early stage startups. Read our previous post here with Jake Farmakis. For this post, we spoke with Justin Welsh from The Official Justin, formerly SVP of Sales at PatientPop about managing burnout.

“Burnout is the result of too much energy output and not enough energy self-invested. In other words, it’s burning too much fuel than you’ve put in your tank.”

Justin started in sales in 2003 and, by his own admission, was not exactly a success story early in his career. In six years, he worked as a salesman for three different companies, never hitting quota once. Around 2009, Justin got the call that would reboot his entire career. Somewhat difficult to imagine nowadays due to its success, ZocDoc in 2009 was a tiny office of less than ten people, having been founded only two years prior. Having just left his most recent company, and with nothing to lose, Justin got on a bus from Allentown, PA and moved to New York City.

It was really a perfect intersection of circumstances for Justin. Overnight, he went from representing products that he felt lukewarm about at best, to representing an exciting, fast-paced startup revolutionizing an entire industry. He worked alongside a team of smart and intensely passionate people and founders that he considers close friends to this very day. The combination of the fast pace of Manhattan, the high performance environment, and selling a mission-driven product really drove him to not only meet his quota, but to knock it out of the park.

Success, however, can be a double-edged sword. Particularly for someone like Justin, who tends to swing between high peaks and low valleys of emotion, success can quickly become an overwhelming pressure to perform. Justin rose to the challenge, however, and after building an enormously successful sales team at ZocDoc, he then went on to replicate his success at PatientPop, building a sales team of over 100 professionals and growing ARR from $0 to $60MM. Few individuals can speak to this type of track record and by all metrics, Justin was the consummate sales professional who was at the height of success.

As his career soared to ever-increasing heights, deep cracks began to appear in Justin’s mental health. The pressure from feeling a loss of control as his sales team grew ever larger pushed Justin to cope through food and alcohol. Looking back, Justin feels his burnout was not due to overwork or stress, it was the feeling of frustration from being unable to control his own success. Particularly in the fast-growing startup environment, where revenues are expected to compound continuously quarter after quarter, sales professionals can feel trapped by a pressure to overperform, even while their success depends more on their team rather than their own skills.

It can take time to realize that mental health has become an issue. Justin’s first realization that there was something wrong was when he looked in the mirror and could not recognize the person that stared back. Multiple bags under his eyes, a bloated face, and an exhausted expression looked back at him. He was burnt out. This revelation did, however, provide the opportunity to rectify the issues plaguing him and put him on the path to managing burnout. He cut alcohol from his diet, started fasting, and began a ritual of long walks throughout the day.

Excessive alcohol consumption has frequently been linked to depression and stress. Removing it from his diet was almost a no-brainer. Fasting, on the other hand, allowed Justin to feel like he was bringing some control and consistency back into his life. His walking ritual afforded him the opportunity to spend more time with his wife during their 3 mile walks every morning. Justin also instituted no-computer zones to reduce his exposure to work, which helped improve his work-life balance.

Sales is a stressful role. There is frequently an expectation of aggressively pursuing leads, improving territories, and intense competition. At PatientPop, Justin implemented several policies to help improve the mental health of his team, and prevent them from suffering as he had been. The mantra was always family first, zoom out, and don’t get caught in minutiae. Top salespeople and sales managers at PatientPop had access to work from home days one to two times per week. This allowed them to recharge, focus on the important initiatives, and spend time with their families. Particularly as senior salespeople assumed leadership roles, there was a need to take a step back and reflect on their goals.

Flexibility does, however, come with the expectation of success. For salespeople who weren’t performing as well, PatientPop instituted a series of training initiatives to help bring them up to speed. The most effective practices were consistent one-on-one sales sessions and bootcamps. To help salespeople prepare for their next role, PatientPop provided training far in advance to ensure that as they progress, the appropriate skill sets are already in place. Justin also recognized top performers with a budget to spend on professional improvement. This was centered on his belief that burnout is a result of a loss of control. This program allowed employees to take their development into their own hands.

Justin’s top tip for managing burnout and mental health as a sales professional is to establish a strong support system and invest in collecting knowledge and experience in your early career. In the last six months, Justin has built a network of people who have had similar struggles with their mental health. These people give him an outlet to speak about his issues and helps him know that he’s not struggling alone. Additionally, he has been able to bring rigidity and structure to his time through fasting, exercise, and technology discipline. Staying off of technology outside of work hours has helped him stay focused and relax and return to work 100% recharged.

Standing where he is now, a successful sales professional who has built sales teams at two successful startups, Justin is glad that he failed early in his career. Through his experience, he can help mentor other sales professionals who may be going through similar struggles. After all, we are at a critical juncture of mental health awareness. We never really used to talk about it, but now there is frequent discussion on the issue.