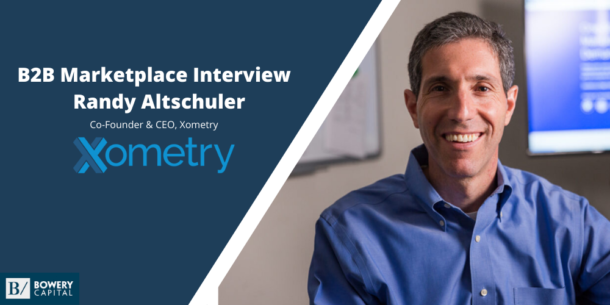 The Bowery Capital team is embarking on a ten week journey to cover B2B Marketplaces. We are doing deep dives on various companies, interviewing founders and investors, and learning what it takes to build success in the B2B Marketplace arena. Below is a part of our content series focused on insights from founders in the space. This week, Randy Altschuler, Co-Founder & CEO of Xometry, answers some of our questions.

Randy Altschuler is the Co-Founder and CEO of Xometry, a 3D printing enabled B2B marketplace for custom manufacturing. Xometry’s marketplace participants have included BMW, Dell, GE, and NASA. Randy is a serial entrepreneur having already successfully built and exited two earlier B2B startups, CloudBlue and OfficeTiger. He joins us today to discuss Xometry and the wider B2B marketplace ecosystem.

Can you tell us a bit about Xometry’s origins and some of the initial product considerations?

While my second company was in the process of being acquired, my Co-Founder Laurence Zuriff and I got really interested in 3D printing. We began learning about the inefficiencies of the market and how there’s a big pricing issue in custom manufacturing. The idea for Xometry, a marketplace for custom manufacturing, evolved from that. Manufacturing is very fragmented and dominated by small businesses that are unlike some retail businesses where there are places for people to sell their goods and consumers to access those goods. Manufacturing is super localized, so the long tail of the Internet has never reached them. We saw this occurring and thought about how we could use technology in a marketplace, specifically with data science or AI, to expand the reach of the Internet to those small manufacturers and allow customers to access them. There was a fundamental lack of visibility and a very inefficient market that was hurting both the buyers, who didn’t have visibility into who was the best manufacturer to make their parts, and the sellers, who weren’t able to fill their capacity and didn’t have access to the best customer for their particular capacity. Online marketplaces opened that up to both of them and allowed them to do much better discovery of one another in a more efficient way.

Which side of the marketplace did you focus on first?

Xometry is my third company–my first two were sold to public companies in different industries and I’ve always focused on demand first because if there isn’t a market need and you don’t have customers, there’s no business. It was the fundamental idea that if we had work, then the suppliers would want that work.

What were the early actions you took when scaling the business that made it successful?

A relentless focus on growth. If you’re not growing in a venture business in the early years, you’re dying. Despite seasonality and every obstacle, growth is critical because without scale, the business is not going to get to the point that you want it to be at. That’s why you raise money from venture companies because you will probably be losing money and that funding helps get you to the scale you need. That’s when you will be able to provide the maximum benefit to everyone, not only the buyers and sellers, but also the shareholders and employees.

Bill Gurley famously says that marketplaces “shouldn’t be afraid to do unscalable things” in the beginning to get the flywheel right. What are some things you did early on that would never work at scale but that you needed to do to get it right?

I don’t agree with that quote–you should never do something that you don’t think is logical. I think it’s destructive to do something that you will abandon shortly. Sometimes you’re going to take shortcuts and come out with a product that’s not as good or efficient as you want it to be, but I would never launch a process or product that I wouldn’t want to eventually perfect or iterate on. Some people believe that if they build the perfect mousetrap, that alone will carry them. In this field, contact everyday with your buyers and sellers is a prerequisite for success. You can’t change people’s behavior, but you can make it easier for them and meet them where they are. I see too many failed entrepreneurs who try to change the paradigm. I think that’s super tough. I think technology is a great way to make things easier and not fundamentally change things. In our industry, manufacturing has been around since the beginning of time and there’s some fundamental things that I’m not going to be able to change and I’m not going to try.

There are marketplace founders that don’t have any experience in their space, some that have moderate experience, and others that are experts and have felt the pain points. How do you think about your founder’s perspective and experience/lack thereof?

Despite what I’ve done in my career, I’d advise people to go with what they know. I’ve taken a different path, but I think it’s always smart to go with what you know. In general, a lack of background in the field makes it hard. I majored in German Literature in college, so I had to get educated about the space. I’m not mechanically inclined and that’s been a challenge that I’ve had to work hard to deal with.

A lot of companies start with a low take rate in the marketplace and then attempt through product development to get into other businesses that increase their take. Xometry has a higher take rate and there are very few B2B marketplaces that have a 20+% take. What has enabled you to take so much of a transaction?

What’s interesting and different in my marketplace is that it’s so inefficient that if you went to 5 different people to make the same product, it’s likely to vary 100%. This marketplace thrives because we’re making the best match out there and that’s really hard to do in custom manufacturing. The customer is saving more money and getting a faster product than they would normally get and the manufacturer has higher margins than usual. It’s important that the fundamental product is really good and not just to come on to other products that you’ll eventually make work. I have to believe in my heart that what I’m offering is really good since I can’t sell something I don’t believe in. I truly believe Xometry is the most efficient way to deliver value to both sides.

With marketplaces, you create a lot of independence and historically the challenge has been finding a way to maintain that independence if acquired. How do you think about this dynamic as you build your marketplace as well as think about exit opportunities?

I’m not focused on exit opportunities–my advice to aspiring entrepreneurs is to build a great company and you’ll have a great outcome. If you’re a true marketplace, you want to make sure that there’s either not a dynamic built into it with someone representing too much of the supply or demand or an investor that is incompatible with the independence of it. The strategic investor needs to be strategic for reasons that don’t hurt the competitiveness or the viability of the marketplace. It may be tempting to have somebody that can jumpstart you, but that may hurt you in the long run and may make your marketplace less effective.

Over the years, what has worked/not worked and how were you able to reposition your company for success following strategies that didn’t work so well?

You have to be willing to adapt. I’ve always prided myself on my willingness to take advice and listen to other people. However, I’ve seen companies that have completely changed their entire business and you have to be careful about that–I’d keep your fundamental core the same. I’ve been willing to change my tactics and approaches and even as we’ve gotten bigger and bigger, I’m still willing to do that.

There are a lot more people and companies that are trying to do what we’re doing which is both good and bad because it validates our business model, but also means more competition. Everything is also becoming increasingly digital, even in custom manufacturing which you would’ve never thought a couple of decades ago.

I saw that Xometry acquired Shift and MakeTime. What was your strategy and goal behind these acquisitions?

I’ve done a bunch of acquisitions during my career and I’ve always tried to add to the management team and collective DNA of the company rather than wipe them out. For MakeTime, they’ve done some things better than we have–the technology was better and ideas were better. We also had no presence in Europe, so we found in Shift a great management team to represent Xometry especially since they’re better attuned and equipped to take on the European marketplace.