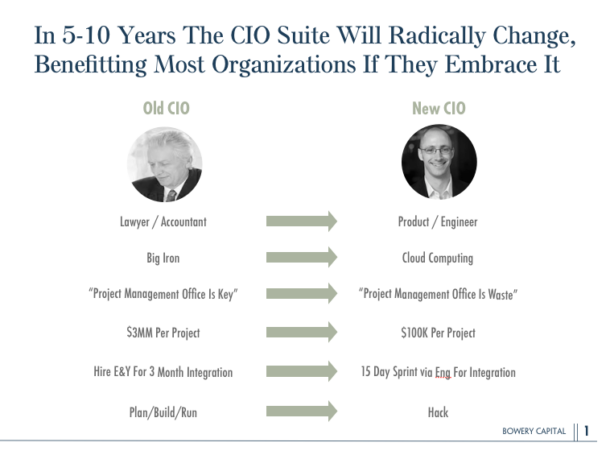 Changing of the Guard in CIO Land

I recently spoke to a group of CIOs who were thinking critically about the incredible growth of digital issues in their own environments and the relationship of those with their business needs. For those that don’t know much about this category, at Bowery Capital we believe CIOs – above the CMO and CTO – are the biggest area for disruption over the next 5-10 years by internet natives. When I presented the slide below (view larger version), I received a lot of positive responses as well as some scared looks. Given the diverse reactions, I thought it would be interesting to dive into Bowery’s logic on how we are thinking about the changing nature of these individuals.

The CIO of Old
The CIO of old was generally a person coming from the legal, tax, audit, accounting or operations side of an organization. They were usually good at contracts or good at finance and grew by cutting costs or negotiating bigger deals. This classic model allowed the CIO suite to control enormous amounts of purchasing and spend, and is largely responsible for the concept of a Project Management Office being started. Based off the military-industrial complex, my friend Marc Frons likes to call this the “CIO IT Complex”. Lots of budgeting, process, consultants, outsourcing, and cost cutting going on. These CIOs would say things like “we have trouble retaining IT talent” and read newsletters that said “Top 10 Ways To Get Your C-Suite Friends To Adopt Your Program!” and in closed and controlled environments this approach worked. However, in today’s world of cloud computing, Bring Your Own Device (BYOD), consumerized IT, etc. it is very challenging.

The CIO of New
The CIO of new on the other hand, has come into their role mostly from a product or engineering function. They formerly had titles like VP, Engineering or VP, Product and for years grew up in the new IT environment. They fit the hacker/developer mold and think about scaling fast and cheaper builds. They believe they have the internal team to handle product, tech, and engineering challenges. They don’t think much about consultants or outsourcing. One of the more fascinating changes is their willingness for a more open and inviting culture. They talk to their colleagues in the executive suite daily and are much more integrated into the conversation and trusted than we have seen in the past. Finally, they know the power of outside technologies and focus on what matters most internally. By acknowledging their strengths and weaknesses they can focus on building what they are good at and identifying what they want to manage internally. They subsequently build relationships with outside partners to handle select components of their IT stack rather than building everything internally.

We’re fascinated where this market will go and believe we are in the early days of a shift in mentality and roles. Some older generation CIOs are up to the change and getting smarter to keep pace with innovation. In most organizations though, we are seeing a changing of the guard from the old to the new CIO.