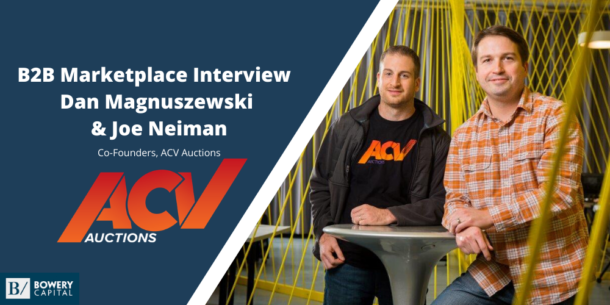 The Bowery Capital team is embarking on a ten week journey to cover B2B Marketplaces. We are doing deep dives on various companies, interviewing founders and investors, and learning what it takes to build success in the B2B Marketplace arena. Below is a part of our content series focused on insights from founders in the space. This week, Dan Magnuszewski and Joe Neiman, Co-Founders of ACV Auctions, are here to answer some of our questions. You can read all of the posts in our B2B Marketplace series by going here.

What was your thought process around which side of the B2B marketplace to focus on first (supply vs. demand)?

Dan Magnuszewski: Early on we were really trying to do both, we were going and talking to franchise dealers to get people selling on ACV, and we thought that if we got a few big sellers then the buyers would follow. But the supply side was harder to break into as they weren’t really familiar with the online auction model, whereas with smaller used car dealers, they are always going to be looking for better and cheaper ways to buy cars, and there was no cost for them to try ACV.

Joe Neiman: When people were selling on ACV in the early days, we felt we really needed to deliver a functioning marketplace for buyers and sellers. In our industry, patience is low, and if you do not deliver people move on. As the marketplace, you are the one making the party happen and you need to bring everyone together. Unfortunately, there’s no easy way to pull it off, so behind the scenes we were hand-selling cars, and doing whatever we could to get numbers on the board for ACV, even if it wasn’t the ideal ACV auction process. This way we could still create traction and people could say: “Where did you buy the car? I bought it on ACV.” This helped the marketplace mature, even though we were also sometimes working behind the scenes texting and calling people to get sales done.

What are some interesting things you did early on that you look at now and think ‘Wow, that wasn’t really scalable,’ but were helpful in getting ACV the early traction that allowed it to grow?

Dan: In the early days, if we saw a Jeep being listed and knew a Jeep-focused buyer, we might reach out and try to get their eyeballs on the car. As the marketplace evolves, you can do better as you personalize this and find ways to show people the stuff they really want in a more scalable fashion.

Joe: You won’t ever get the opportunity to build the elegant solution unless you do the scramble behind the scenes. Almost everything we did started from humble non-scalable solutions. For instance, an intrinsic part of an auction is to generate a bill of sale, but we didn’t have a way to do that when we started, we were manually doing this in Excel on a car-by-car basis. And for car inspections, for months I would go out and do the vehicle condition reports on cars myself.

Dan: Initially, we had dealers do the vehicle condition inspections for us, but this made us reliant on having someone at that dealership managing this process. Dealers would stop listing on ACV and when we reached out, the reason was that someone had been promoted or left, and no one at the dealership had taken over handling our inspections. To get around this, we said “OK – we will just show up and do the inspections ourselves,” primarily to ensure we could source new cars on a consistent basis. What we hadn’t realized would happen, was that buyers were now more interested in the cars we inspected ourselves, because now they had undergone a third-party inspection. This wasn’t our main goal in doing the inspections ourselves, and it led to us needing to hire inspectors all over the country, but the reality is that there are huge benefits to doing it this way and with our business model we can scale it nationwide.

Much of the success in B2B marketplaces has come from solving for order visibility, but looking at more mature B2B marketplaces many have expanded into a more full-stack solution. How did you think about this narrow vs. wide approach when you were starting out and how are you thinking about it going forward?

Dan: When we started building ACV, we knew that the existing auctions offered a range of add-on services beyond just matching buyers to sellers. We were really laser-focused on getting our core marketplace going. Without the marketplace where people come and exchange, none of the add-on services were relevant. As we grew and raised capital, we could start doing things like building out a financing company, a transportation company, and doubling down on vehicle inspections. Some of these innovations we were almost forced into because we knew we had to own all of those different steps in the transaction to ensure a high level of quality – we don’t want users churning out of ACV because we chose the wrong transportation partners.

Joe: Name recognition and reputation were something we felt we really had to get right, and if you try to go too fast too early in a marketplace that can really backfire and I think we probably flirted with that at times. As you grow hiring becomes a challenge, you can try to hire people and tell them “just go do this,” but it is not that easy. It really comes down to training and making sure people develop a deep understanding of the company DNA and what differentiates ACV. One thing we have done right is that we always try to keep an entrepreneurial mindset. We have all done entrepreneurial things before ACV and that has given us a level of resiliency. There were many sleepless nights, many times we could have packed it in, but I think that internal motivation is what has gotten us to where we are today. Anytime you are trying to disrupt an established industry, it is always going to be much harder than you initially think and that has been our reality. But in the last year-and-a-half we have really seen adoption at broad scale and now we are seeing people willing to seek us out versus ACV having to go and seek out our customers.

The management teams of some of the most successful B2B marketplaces have had different levels of domain expertise prior to launching. During the early days, how did your respective levels of prior industry knowledge help or hurt?

Joe: In any industry there is so much going on behind the curtain – if you aren’t living in that industry there are a lot of things you aren’t going to know. Before ACV, I was a car dealer, so I wasn’t an “industry guy” in the sense I wasn’t a wholesale automotive seller, but I was a customer. That perspective really helped me as I wasn’t someone coming out of a major auction house saying, “we can do this better,” I was a customer saying, “I need this for my business.” My advice is that you have to go live it before you can try to disrupt it. Because of our past experiences, we were able to develop a nuanced understanding of the industry. For a B2B marketplace to succeed you really need to understand where the landmines and pain points are and from Day 1 we had a better understanding of those issues compared to some of the other companies in the space.

Dan: My dad was an amateur car dealer for most of my life, so I had some knowledge of automotive auctions even though I hadn’t worked in the space. Coincidentally, my father also worked as a vehicle inspector for Allstate and it is funny to me how big a part of the business inspections have become over time. Having a good blend of people who understand product, sales organization, and team building is useful, but having that specific industry knowledge on the team has also been very valuable.

How do you think about exit opportunities for your business or the broader B2B marketplace ecosystem?

Dan: We have seen other startups try to do similar things and they would get acquired by the big auction companies and get put on a shelf, and it seemed like that was kind of their game plan. I think that was a big concern for us, would we want to do that? The way I look at it is unless the buyer is 100% committed to cannibalizing itself, you are going to get dismantled for parts and put on a shelf in that kind of sale. The other great thing we’ve had going for us is we’ve had investors who have been fully committed to a long-term plan and they believe in the vision, the opportunity, and the leadership. For founders, it is important to really think about who you choose as your venture partners. Having alignment with your VC’s is key so you can know what everyone is looking for at the end of the rainbow; without this alignment there is going to be a lot of friction.

Joe: I think we have always thought let’s just focus on building a great business and then we can go public or find the right buyer. Obviously, being venture-backed there will be some kind of liquidity event but we see this as the future of a massive industry and we want to be around for a very long time to build a sustainable business, not just a company that we can flip in a couple of years.