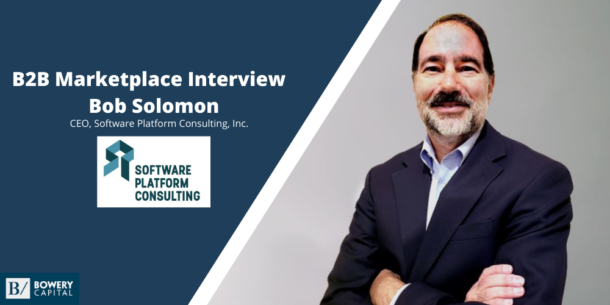 The Bowery Capital team is embarking on a ten week journey to cover B2B Marketplaces. We are doing deep dives on various companies, interviewing founders and investors, and learning what it takes to build success in the B2B Marketplace arena. This week, Bob Solomon, CEO of Software Platform Consulting, Inc. (SPCI), answers some of our questions. You can read all of the posts in our series by going here.

Bob Solomon is the CEO of Software Platform Consulting, Inc. (SPCI), where he advises enterprise software clients on developing multi-sided platforms or networks. In addition to SPCI, Bob serves on the Strategic Advisory Board of Genstar Capital and as a director at Ariel Investments, OEConnection, Enverus, LeaseAccelerator, Bamboo Rose, Eved, LLC, and XSB, Inc. Prior to founding SPCI, Bob was President of ServiceChannel, a SaaS platform in the facilities management industry, and he served as SVP, Network and Financial Solutions for Ariba, Inc. (now SAP Ariba). Bob joins us today to share some of the insights he has developed as a B2B marketplace investor and expert.

You were an SVP at Ariba, one of the pioneering B2B marketplaces – how did you first get involved with the company, and how have you seen the B2B marketplace space evolve over the last 20 years?

Before joining Ariba, I had spent many years in the food industry dealing with supply chain issues. Around 2000, suddenly all my clients were calling me and asking me to register on the Ariba network. I had no idea what the Ariba network even was, but after the third customer called and asked me to sign up, I thought I had better learn about this thing. Once I looked into it, I could immediately see Ariba’s potential. It was becoming clear that the internet was going to lead a shift in B2B commerce, and I thought I should get involved sooner rather than later. I decided to reach out to Ariba, and it just so happened that they had a job opening for someone with expertise in the food industry’s supply chain – I applied for the role in 2000 and that was how I joined the company.

While you were at Ariba, did you focus your efforts more towards onboarding suppliers or corporates when you were thinking about expanding the platform?

I think in a two-sided market, you never get to say it is “either-or” – it’s always “both”. In the case of Ariba, it was important to bring the supply base of the larger corporations onto the network. It was a bit of a one-two step, where we kept adding corporates (or what we called nodes) to the network, and then in order to meet their procurement needs we had to onboard their suppliers. This meant we had an enterprise sale on one side that we had to treat like any other enterprise sale, but then the time-to-value was driven by how quickly you got the suppliers enabled.

You oversaw Ariba’s platform monetization efforts – how have you seen marketplace monetization tactics change and as an investor are there any that particularly excite you (e.g., purchase financing, fulfillment, etc.)?

There are different platforms and networks that offer different kinds of value propositions. And the value proposition for some is matchmaking – introducing new buyers to new suppliers and vice versa – and they tend to monetize in a particular way. Ariba was more about the automation of commerce between known buyer-supplier pairs, which monetizes differently from a matchmaking platform. There has been a proliferation of value propositions that different marketplaces offer, and within each of those there is a multiplicity of monetization methods. It’s been really fun to see the variety that is out there and yet I think within them there are some common themes and trends across the different types of platforms that people invest in and that I work with.

What are some of the marketplace monetization trends you are seeing today?

There is a lot of debate over subscription versus transaction-driven models. Investors in the markets like subscriptions more than they like transactions, but transactions are sometimes the basis by which value is exchanged on a marketplace or platform. Transaction-based models can be tough from an investor standpoint, but it is a beautiful thing for customers/suppliers in a two-sided market where participants think of transactions as how value is being derived. A simple example would be eBay – it would be nice if eBay were a subscription model, but it is fundamentally about the exchange of hard to find goods and that does not lend itself well to charging a subscription. In a typical two-sided marketplace, you have three players: the buyer, the seller, and the marketplace’s owner. In designing a marketplace, you must meet the needs of all three groups, and those do not always fit neatly with each other – marketplace pricing is a puzzle to balance these group’s respective needs.

Many new vertically-oriented B2B marketplaces have cropped up over the last decade – is there any sector where you think there is an unmet need that a B2B marketplace could solve?

When I left Ariba 10 years ago, there were quite a few vertical opportunities and I started to go after a couple of them, but I think a lot of those opportunities have now been subsumed. For instance, when I was at Ariba, I noticed that on-site services were not well covered and today there are a bunch of people who are in that sector. There were also lots of parts and MRO businesses that were similarly underserved but now there are many marketplaces focused on those areas. I think the food industry has lagged behind a bit, so there may be some remaining vertical marketplace opportunities there. I also think that any time a new industry forms there is an opportunity to create a marketplace or platform serving that sector. Industries like renewables, cannabis, additive manufacturing, electric vehicles – all of these could potentially support new marketplaces. Another one that has fascinated me is the potential for a marketplace for procurement at the federal, state, and local level. When you think about the PPE shortages during the height of COVID-19, an integrated federal and state marketplace could have helped solve some of the problems that cropped up around prioritization and distribution.

What are some of the levers that you’ve seen successful marketplaces rely on in the last ~5 years to drive platform monetization and ensure retention?

Marketplaces tend to climb what I think of as a value stack between buyers and suppliers. At the lowest level of value, the marketplace is just establishing rules and rails for connecting buyers with suppliers – Ariba was a bit like that but EDI would be the classic example of creating rails and some rules but not a lot of extra value-adds. And then you have marketplaces that will add SaaS applications on either side for the buyer or supplier and things like counterparty credentialing, matchmaking, payments, financing, and so on. Marketplaces are about riding that value stack up and completing more of the transactions by finding ways to create more value for participants and more matches between the parties on the platform. In any good marketplace, there is a friction between buyers and suppliers that is being solved – the question is often how many of those different frictions does the marketplace try to take on and in what order.

As someone with deep B2B marketplace experience, what trend are you most excited about going forward from the perspective of an investor?

From the perspective of an investor, what is exciting, especially having gotten involved in marketplaces 20 years ago, is how much cheaper it is now just to put up the tech stack to make a marketplace happen. The other thing that is exciting is that there are so many people now who study these two-sided marketplaces and a whole language has developed around them. There is a growing group of people for whom it’s no longer just an academic exercise, and today you have experts in strategy, marketing, pricing, and serial entrepreneurs focusing on the advancement of two-sided marketplaces.

What key factors do you think will separate the winners from the losers in this generation of vertical B2B marketplaces?

If you zoom out, it is always about keeping your eye focused on the frictions that you are reducing between the parties on the platform. It is easy to talk about what you are going to do once you get to scale, but the question is how are you going to get there? Everyone has a plan for all the ways they are going to make money once they have a gazillion users. I understand how there are a lot of ways to make money once the whole world is transacting on your platform, but the real challenge is reaching that point. And I think, that is always about what friction am I removing? How am I making the way two parties interact better, faster, cheaper, and more painless? If you are ever going to solve the chicken and egg problem with buyers/suppliers, it is going to be because you just provide so much more value than the way business is currently being transacted in that space.

What are some of the differences in what makes a B2B vs. a B2C marketplace succeed?

Compared with B2C settings, B2B relationships are in most cases much more substantial, more risk-laden, and involve money that is not one’s own. Those factors have made B2B marketplaces far more difficult to build and make them not for the faint of heart. With B2C, you have the potential to go through tremendous hyper-growth. You do not see that very often in B2B, but what you do see in B2B is marketplaces that can grow 15%-30% annually over a period of many years. Because of these different growth trajectories, B2B requires much more patience to find success.