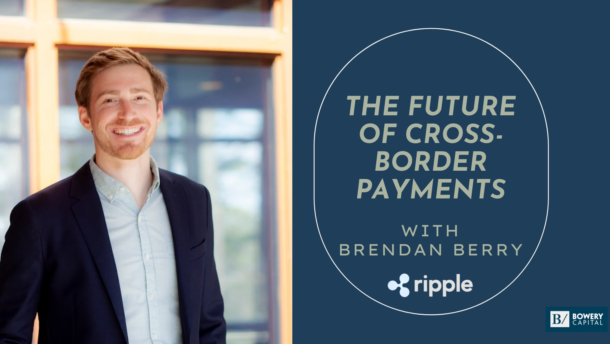 The Bowery Capital team sat down with Brendan Berry, a Director of Product Management at Ripple, to discuss the state of cross-border payments. Ripple is a cryptocurrency company, which leverages a digital asset in order to help companies move money across borders. Prior to Ripple, Brendan spent time on product teams at Amazon and Slack.

What are the main challenges of cross-border payments? In your eyes, is there one main bottleneck?

At a basic level, the predominant method by which funds flow across borders is called correspondent banking. What this means is a large financial institution will have formal relationships with other financial institutions – often opening up a bank account (or multiple) in foreign markets and preemptively parking funds in what is called a nostro account. Whenever an institution wants to move money, the institution sends a message to their correspondent bank in the desired foreign country, basically saying “I want to debit X from my account, and credit those funds locally to Y”, in order to pay out an end beneficiary. In this system, funds aren't actually moving across borders in real time, but rather they are moving domestically within a country, from someone who is holding local currency.

There are quite a few challenges with cross-border payments. The main bottleneck is that physical currency (fiat currency) does not travel well. Often, it can be more efficient or even faster to take a bag of fiat currency on an airplane with you to a neighboring country, rather than to try and send funds across borders. There are a number of systems and solutions (including correspondent banking) built around the core problem that fiat doesn't travel well. Ultimately, none of the legacy systems solve this core pain point, resulting in cross-border payments experiences that are expensive, slow, and inefficient for both end users and businesses alike.

This is not a new issue for businesses (and even consumers). Why has it taken so long for innovation?

There has been innovation in both domestic and cross-border payments, but much of it has been on the front end, rather than tackling the root problems. Through improvements to the front-end, companies have dramatically improved the ease at which users can make payments, and in turn have hidden some issues from end users. However, most of the front-end solutions dont actually solve the core problems in payments, but rather transfer the pain associated with interacting with the problems from one party (or one stage of the payments workflow) to another.

For example, in the United States, the predominant domestic payment rail is the ACH network, which is not a truly instant payment rail. That means if one person were to want to transfer funds to another person’s bank account, those funds would not be available immediately. One company that has had great success building a domestic payment product via ‘solving’ problems with domestic funds transfers in the US is Venmo. Contrary to what it may seem like on the application’s frontend, Venmo is not actually moving funds to user’s bank accounts in real time. Behind the slick user interface, Venmo is simply crediting and debiting digital accounts. The true settlement or funds movements only occur when you initiate a transfer to take funds out of Venmo – and that process is far from instant and takes multiple days, as it still leverages the ACH payment network. Venmo’s solution sits on top of the same payment rails that other companies have used for many years, but the UX has changed in order to deliver customer value. This is a great example of innovation within payments, without actually solving underlying issues with infrastructure (such as the speeds of the ACH network).

To me, what’s most exciting are the areas of innovation that are truly solving the root problems with moving money – the underlying infrastructure. The people and teams who are innovating at this level have an opportunity to fundamentally change how we interact with value.

Day 1. I think we are on the frontier of something really powerful, which is that we now have technology that solves the root issue through blockchain and crypto.

While physical fiat currency may not move efficiently, digital currency certainly meets that bar. By leveraging a digitized asset (ie. cryptocurrency) you can move funds in real-time, enabling not just information or messages to be sent, but actual real-time funds settlement - bypassing the pain and costs associated with correspondent banking, in favor of real time settlement.

One of the areas where Ripple has differentiated itself is in our target audience. A lot of crypto products to-date have massively changed the way things work for crypto-native companies and individuals. Ripple has taken an approach from the beginning to build solutions and use cases that solve a real problem. I believe that when innovators and developers really start to think about not just how to utilize a cool technology but the practical approach of solving real problems and consumer pain points - that’s where you see impact.

What role will the blockchain play in this space going forward?

There is no question that the blockchain and crypto can change the way that money moves. We want to enable the ability to send value wherever you want in the world - instantly and cost effectively. The way we work to make that happen is by using cryptocurrency - XRP - as a bridge between two fiat currencies, enabling both movement of funds between parties and currencies.

When you think about cross-border payments, one of the most important factors is settlement (when funds actually clear). The traditional manner of preemptively parking funds, which can be incredibly expensive, is an estimated $10T market, but through using a digital currency, one can settle these transactions instantaneously in real time.

So far, it appears that a lot of the advancement has been on smaller payments. For very large transactions banks still seem to dominate the space. Do you see room for new entrants on these larger transactions?

The real issue here is liquidity. The top 5 banks control nearly half of the world’s total fiat liquidity and so it makes sense that big banks are able to provide settlement services for very large volume payments, while others have not been able to do so. With large transfers to any country – especially outside of a G20 currency – this becomes a really complicated issue to solve. Liquidity is the gating factor when you think about growth in cross-border payments.

Liquidity is not a challenge specific to fiat or cryptocurrencies. If you use a digital asset, you are still hamstrung by crypto liquidity. Think about pre-2017 crypto - if you pooled all crypto assets and looked at total liquidity, it was a few million dollars. In 2022, if you look at Bitcoin alone, the volume usually moves between $20 and $50 billion every day. This is exponential growth and it is still growing. This provides liquidity and enables groups to move a digital asset and be able to settle large ticket transactions. You now have the power to lead a lot of innovation on these larger ticket transactions because there is now the liquidity to support these payments.

How do you see a potential recession affecting cross-border payments?

It all comes down to the use case and how critical it is for the business. The use cases that payments are serving and how resistant they are to an externality is the question to ask when thinking about the outlook.

How is Ripple solving cross-border payments? What makes your solution so unique?

Ripple offers a cross-border payments product that allows enterprise customers to move money across borders and currencies with instant settlement, on a 24/7/365 basis.

We have solved this by using cryptocurrency - XRP - as a bridge asset between two fiat currency pairs. In turn, our customers don’t have to lock up capital in pre-funded destination currency accounts, thus freeing up working capital to deploy as they see fit. Additionally, we give our customers access to optional credit lines, which helps solve their liquidity challenges not just in payments, but throughout their organization (such as internal treasury management).

When you think about sending a payment cross-border, you’re mostly looking at an international wire as an alternative or an aggregator that is using a service like parking capital, you are adding a lot of cost to your business. We provide a modern application — built with technology that was literally created for value movement – which lets you settle funds and pay out right away, all while saving an organization money.

What else in fintech are you excited about?

I think about fintech often based on how it relates to crypto and the blockchain. We are seeing a lot of fintech companies starting to embrace web3. For example, Stripe, who previously enabled crypto payments, went away from that a while ago and is now back doubling down on crypto payments. Square is similarly betting on digital currencies, not just for cross-border payments, but peer-to-peer and point of sale transactions. I am also excited about the applications of NFTs beyond just collectibles.

Loren Straub and Gabe Hawkes of Bowery Capital sat down with Jillian Williams of Cowboy Ventures to dig deeper into one of the hottest markets in fintech, Buy Now Pay Later.