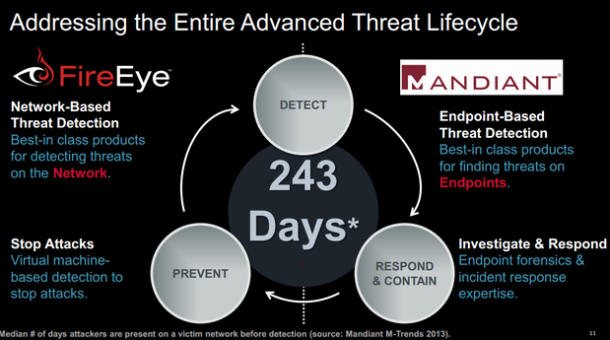 Most folks saw the news on Friday about FireEye’s acquisition of Mandiant for $1b+ in cash and stock. This is a huge deal in the security space and one that has gotten a lot of attention given the combination of two prolific industry folks, Kevin Mandia and David DeWalt, as well as the fact that it is an almost perfect acquisition given the compliments of the tech. From my view, there were several interesting things that we at Bowery Capital thought went unnoticed related to building next gen. enterprise software companies.

What Is Your Customer Number At $100m In Sales
It was interesting to see how high Mandiant’s numbers were, in 2013 they did $100m in sales and had about 500 customers. Effectively a $200k Annual Contract Value (ACV), which is a huge number when you think about it. I don’t know what the churn numbers are (assume low), but at these ACVs in a services business (i.e. high margin) it is no surprise that they were able to be profitable so quickly.

Building To $100m In Revenue Still Takes A Long Time
Kevin Mandia is one of the most respected and successful folks in the industry today. He built a killer solution for the market and even at that, it took him about 9 years to build a $100m company. Building real enterprise software companies is not easy and can still take a really, really long time.

This Is One Of The Highest Comps In The Space
The deal is valued at about 10x their $100m 2013 revenue, which is an incredible deal for Mandiant. While they have Intellectual Property (IP) in various tools and technology, and say that 50% of their revenue comes from endpoint products, the business is a lot like Accenture or PWC; they charge professional service revenues for a team that shows up to do custom research and consulting. 10x is at the top of the spectrum, which is almost as big as the Checkpoint deal. Even if we are slightly wrong, it doesn’t come close to deals like Sourcefire (5.5x), Fortinet (8.7x), Symantec (2.0x) or Websense (2.3x).

Never Underestimate The Value Of A Good Case Study
As most folks know, Mandiant became incredibly famous when they released the report, “Exposing One of China’s Cyber Espionage Unites.” This report linked the Chinese army to a coordinated campaign of hacking attacks against U.S. companies and government agencies. This no doubt put them on the map in a big way from a PR and marketing standpoint, our guess is that this initiated many customer and acquisition opportunities.

Overall, the deal is a huge win for the industry and we are excited to see what the combined company ends up doing in the space. In addition, we believe there will be more consolidation in the space and this is likely more the ‘tip of the iceberg’ as more and more specialists in the category get acquired.