How To Tell When A SaaS Startup Is Ready For IPO

If you’re a founder, early employee, or investor of a growing SaaS startup, chances are that the word “Exit” has crossed your mind. Generally, you have two options: get acquired or IPO. While the former has long been a viable option, the public market for SaaS businesses is relatively new. Salesforce.com was the first of its ilk to go public (in June 2004); the stock priced 30 percent above the initial filing range and ended its first day of trading up 56 percent. That success demarcated the market’s receptivity to SaaS companies, and a precedent was formed. Blackbaud and RightNow followed in subsequent months, and so have 75+ other SaaS businesses since then.

To understand what it takes for these companies to exist in the public markets, I and James Shalhoub, an investment banking associate at Jefferies, reviewed each of their S-1s and compared their IPO profiles. This post was also featured in VentureBeat.

Based on historical data, the “median SaaS company” at IPO is 10 years old with ~530 employees, generates nearly $100 million in run-rate revenue, grows at 48 percent, and still operates at a loss. Founders, early employees, and investors would likely see their SaaS companies price above the filing range to achieve a ~$600 million market cap and watch their shares pop 32 percent after their first day of trading. The table below shows a range of the general IPO data points for these businesses.

Interesting benchmarks, but it’s unfair to apply these metrics to the entire SaaS universe. We consolidated the SaaS IPOs into three groups based on equity value at IPO: market cap of $500 million or less, between $500 million and $1 billion, and greater than $1 billion. We then analyzed relevant SaaS benchmarks, related to growth, profitability, capital allocation, and efficiency, to uncover deeper trends.

While public investors demand higher revenue growth from technology companies over other industries, the benchmark is set even higher for SaaS companies. After all, one merit of these companies is the ease with which they can deploy their product. Management can, in turn, spend more resources on acquiring new customers and expanding sales within existing accounts. The stakes are high for larger SaaS companies, though, as demonstrated in the chart to below. 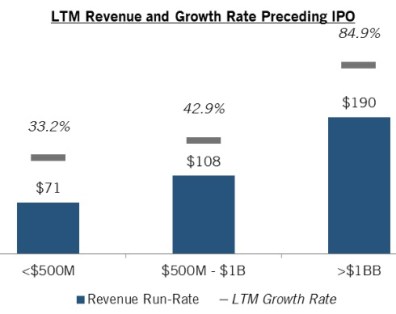 SaaS players that achieved a $1 billion+ market cap at IPO had a median trailing 12 month (LTM) growth rate of 85 percent, helping fuel their larger valuation. The achievement does not go unnoticed, however. Every single one of these companies priced above their filing range and had a median first day close of +64 percent – the most of all three segments. These companies demonstrate that they can grow considerably while at scale and have likely either created a new market or captured meaningful share of an existing one.

At IPO, a SaaS company is likely not yet profitable – just 29 percent had positive operating margins in the fiscal year preceding their IPO. They are rapidly growing in customers, however, signing contracts that provide high margins and recurring revenues. Investors prefer to capitalize on this early momentum, reasoning that profitability will come. The “land and expand” practice, for example, enables incremental margin, as SaaS companies upsell expanded product features and services to their existing customers at a much cheaper cost of sale. The first chart below comes as no surprise – despite relatively high gross margins, each segment of SaaS companies has negative profitability. In just two years following their IPOs, however, they make demonstrable progress towards breakeven. 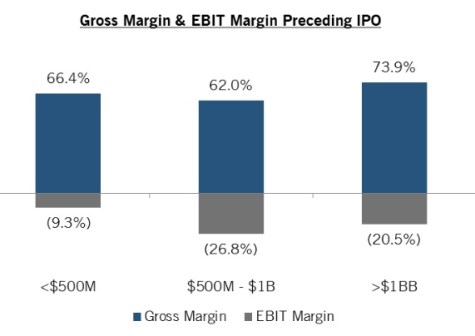 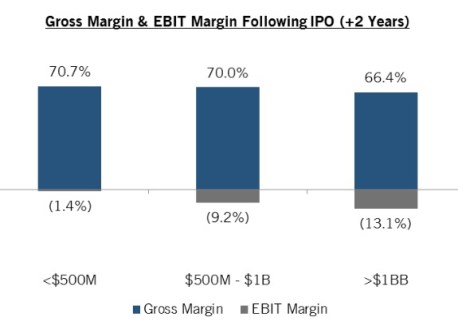 When analyzing SaaS companies’ expense allocation at IPO, it’s clear where the majority of the money goes:

In order to sustain high growth, and loaded with cash from private and public investors, the SaaS companies can invest significant resources into product development and large sales teams. The former is important in order to upsell your existing client base, diversify your product offering, and capture additional market share. The latter is important to make those things happen, and your company grows with that investment.

In the three fiscal years following IPO (including year of public offering), SaaS companies continued to invest in massive growth, using their public market liquidity and cash flow to invest at a similar rate prior to their IPO. Mid-sized players tail back their R&D a bit, though the $1 billion+ players actually invest faster in R&D and less in S&M than they did prior to their public offering.

As both the public and private markets shift over time, the demand for certain business profiles evolves. SaaS companies have demonstrated that they can sustain explosive growth and generate high profitability, and eventually do both (we’re looking at you, Veeva Systems). Accordingly, over time the benchmark for profitability at IPO has gone down. Rolling averages for gross margin converge to ~65-70 percent for SaaS companies, while EBIT margin goes deep into negative territory.

For revenue growth however, investors have maintained their already-lofty growth expectations within each segment. Effectively, as VC investment towards SaaS companies has increased dramatically over the past decade, management teams can spend more time focused on growth and less on cost efficiency.

The data we looked at suggests that the largest SaaS players must continue to prioritize growth while simultaneously investing in new products and sales. After all, if they’re already achieving incremental margins with each new sale, investors want higher volume. Meanwhile, smaller SaaS companies can still go public, but more emphasis will be placed on operational performance, and an outsized valuation is not likely.

Independent of size though, there are other key points to consider in assessing whether a SaaS business is ready to go public:

Why I Joined Bowery Capital