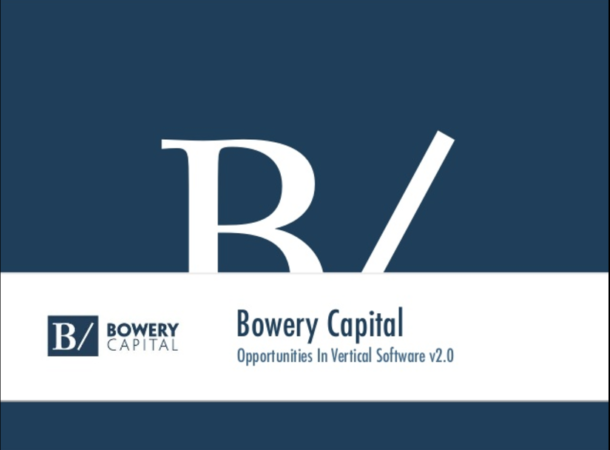 Continued Opportunities In The $122B Vertical Market Software Space

At Bowery Capital, we focus a third of our efforts on vertical market software and the impact it is having on a select group of industries. In 2014, we put out a report called Opportunities In Vertical Software v1.0 and continue to be bullish on the growth of software solutions tailored for specific industries. Today, we are releasing Opportunities In Vertical Software v2.0. The report includes our point of view on various industries, the positives and concerns, the industry leaders, software spend metrics, funding activity, investors, and key trends. Below the report, we highlight ten fun facts about vertical software since the publication of our last report. We hope you enjoy it and will be following up in the coming weeks on the blog with more info on each industry. You can check out the full report here.

(1) Did you know that there is a faith-based vertical market software company in the Religion vertical that is valued at over $1.0 billion? Ministry Brands works with more than 55,000 churches and faith-based organizations in North America and provides a SaaS based platform for churches to handle financial accounting, background screening, online giving, church management and website services. The company will do over $100MM in EBITDA in 2017.

(2) As a firm with roots in New York, the state continues to produce some amazing vertical market software businesses, with 2016 seeing Siemens acquire CD-adapco for nearly $1 billion. The Melville, NY based business provides applications for computer-aided engineering specifically in the Automotive vertical. CD-adapco follows the 2015 buyout of Lake Success, NY based DealerTrack Holdings for $4 billion by Cox Automotive to also consolidate the Automotive software vertical.

(3) Since our last report, there has been virtually no change in the largest vertical market software players in the public markets. Veeva Systems remains the largest vertical market software business in the public markets today with a $5.5 billion market capitalization. The business sells into the Healthcare vertical and provides cloud-based business solutions for the global life sciences industry. Guidewire Software in the Insurance vertical and athenahealth in the Healthcare vertical come in at a distant second at roughly $4.0 billion in market capitalization. Guidewire sells core back-end software for property and casualty (P&C) insurance carriers and athenahealth sells cloud based software for healthcare providers.

(4) 2015 saw one of the largest vertical market software acquisitions ever with the SS&C acquisition of Advent Software. Advent Software makes software designed to automate portfolio accounting for investment management firms and focuses on the Financial Services vertical. Advent had undergone an IPO in 1995 and was sold to SS&C in a $2.7 billion cash deal in July 2015. While farther behind on total amount 2016 saw Siemens acquire CD-adapco for nearly $1 billion as mentioned above.

(5) While not very well known, New York City has had a large public vertical market software company lurking powerfully in the background for a number of years. Medidata Solutions, a SaaS business that specializes in platforms and data analytics to address operations throughout clinical trials, went public in 2009 and today is worth roughly $3.5 billion. The Healthcare business is headquartered on Hudson Street and has over 1,500 employees will generate $400MM of ARR through 2016.

(6) Several notable investors have positioned at least a part of their investment strategies to focus on vertical market software players. At the earlier stage Emergence Capital, Benchmark Capital, and Bessemer Venture Partners have become go-to firms for any early stage entrepreneur. Growth and buyout players also dominate vertical market software investing in terms of company count, with Insight Venture Partners and Vista Equity Partners having over 10 investments each in various verticals like Insurance, Healthcare, Oil & Gas, Manufacturing, and Automotive.

(7) As far as we can tell, no standalone vertical market software company has reached $1 billion in annual revenue as of yet. athenahealth may be poised to break that trend by the end of 2016 as the company reported $925 million in annual revenue in 2015. Given their growth rate and relative to competitor companies in other verticals they are destined to be the first vertical market software company to reach $1 billion in revenue. Dealertrack in the Automotive vertical was in line to be the first to $1 billion, but was acquired by Cox Automotive when their annual revenues were roughly $850 million.

(8) The majority of vertical market software companies tend to be located outside of major entrepreneurial hotbeds such as Boston, San Francisco, and New York City. While these areas have their Veeva Systems, Fleetmatics, and Medidata Solutions, cities like Kansas City (Epiq Systems), Cleveland (Eaton), Deerfield (Textura), and Landover (2U) call these major vertical software businesses home. Not surprisingly, we find that this is primarily driven by the core founding team having industry experience at a major player that exists in that geography or city.

(9) The largest up and coming vertical market that could create the next billion dollar software company? You didn’t guess it. Cannabis. Many would be surprised to learn that as of the beginning of 2016, the US market for legal marijuana had by most measures already well surpassed $3 billion. But Election Day this year was a game-changer, as 4 states joined the existing 4 (plus DC) in effective recreational legalization. With many other new initiatives passing this brought the total number of states with some sort of legally acceptable use up to 28 (plus DC). Investor appetite in the space is also turning the corner; by our count only ~70% of new cannabis businesses were bootstrapped in 2016 versus over 95% a year before.

(10) 2016 was definitely the year of vertical software buyouts. We count six for a combined total of $13.1 billion through the back half of 2016. Construction management software vendor Textura, which had its IPO in 2013, sold to Oracle this year for $663 million. Fleetmatics, a hallmark vertical software IPO in 2012 focused on the transportation space, announced its acquisition by Verizon for $2.4 billion in early November. DealerTrack, Epiq Systems, Vertafore, and PGA Holdings also went public and were bought out through 2016. The market continues to see new M&A players looking to buy growth and strategic advantage, which should create enormous opportunities for vertically minded software founders.