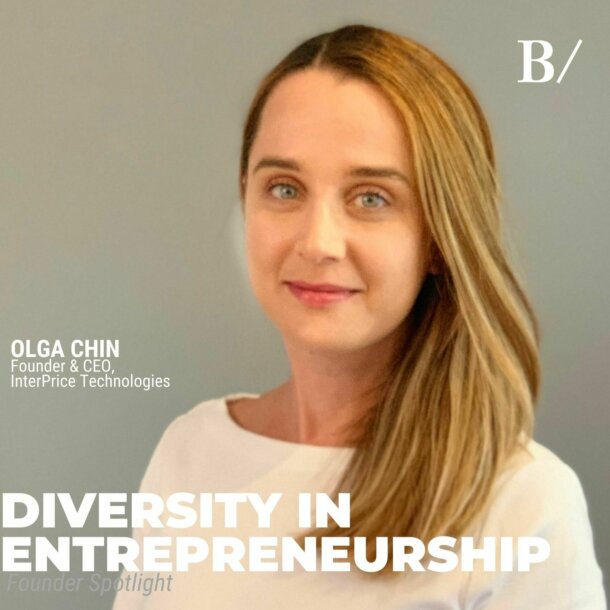 The Bowery Capital Team launched a blog series titled “Diversity in Entrepreneurship”. Throughout this series, we discuss with Founder/CEOs in our portfolio the impact diversity has had on their startups and careers. This blog series is just one initiative we are taking to better educate ourselves on diversity-related challenges and under-representation among high growth startups. We strongly believe in the power of representation and hope that through storytelling we can help encourage and inspire the next generation of entrepreneurs and leaders in tech. You can check out the introduction to the series here.

For the next installment of this series, we sat down with Olga Chin, Founder & CEO of InterPrice Technologies. InterPrice is a vertical SaaS fintech platform for streamlined communication between corporate bond issuers and their banking partners. Prior to launching InterPrice, Olga was most recently the head of debt capital markets at Loop Capital Markets where she executed corporate bond transactions for Fortune 500 companies. Prior to Loop, she spent almost a decade at MUFG Securities in the debt capital markets role as well as Ellington Management Group. Olga has an A.B. in Economics from Princeton University and is a CFA charterholder.

What does diversity mean to you? How is this important to you and your company’s values?

To me, diversity is more than just the big three dimensions of diversity: race, gender, and sexual orientation. Perhaps because diversity statistics often reflect these three dimensions, that’s how diversity is advertised and defined these days. But I think it is so much more than that. It extends to socioeconomic backgrounds, to disabilities, to neurodiversity, to generational differences.

As a first generation immigrant, for context, my parents and I came here from Russia in the late 1990s - and therefore, I am obviously particularly sensitive to creating a culture that welcomes team members with different cultural backgrounds. And even more importantly, I care about creating a safe space where people can be comfortable with those differences - meaning that we talk about cultural differences openly, even during our company-wide calls, and everyone feels empowered and comfortable with sharing a few laughs together. That’s important because it brings out the best in people and enables them to feel safe to bring their diverse backgrounds into the mix during all parts of our work.

How has diversity played a role in your career? How has your background shaped the progression of your career and startup?

Because I spent the first decade or so of my career on Wall Street in a fairly typical investment banking role, I am well aware of the quite apparent lack of diversity in the financial services space. Even the seemingly diverse environments were actually the opposite of that - and yet somehow it all seemed normal.

But throughout all of that, I naturally gravitated towards what I associated with most - incredible women that paved the way earlier, so that women like myself can “climb the ladder” or do most things that men can on Wall Street now. These amazing women helped me then and they are helping me now, in more ways than are imaginable.

During the 2008-2009 financial crisis, for example, I was an analyst on a trading desk at a hedge fund that dealt with mostly mortgage backed securities - super fun times. For some of my time there, working with my female boss Marion - quite a vibrant personality individual who used to bring me super expensive dresses to wear to parties from her own closet - was probably one of the most transformative experiences of my life. Once we all got unsurprisingly let go without much in terms of bonus money, Marion took me to a wine bar near my house and wrote me a personal “bonus” check to thank me for putting in insane hours and hard work. Given Marion’s successes on Wall Street, it was probably a rounding error in her checkbook… but it mattered so much to me and Marion had all of the emotional intelligence to see that.

Starting your own business - particularly a startup - is not for the faint of heart. People talk about “ups and downs” and all of that… but the raw feelings that a startup founder must grapple with almost on a daily basis are intense. I go to “Marions” in my life - women that think loyalty and honesty are strengths - and I am humbled to know women such as Alex Lebenthal, for example, who are my sounding board pillars during this part of my career journey.

What challenges have you faced within the entrepreneurship and venture community?

There is obviously a lot of talk about increasing diversity in the VC / founder space. I probably see at least a few tweets a day on female founders / female angels alone. And that’s great - however, I have also found that not all of that reflects intentionality and purpose (or is genuine). Sadly, simply talking about the lack of male and female diversity in the finance and tech industry is not the same as taking action. When you dig deeper, genuine support for female founders is hard to find.

Of course, there is also the notion that female founders feel the need to prove themselves at each step significantly more than male founders - and I believe that’s the case. During the last few months in particular, I’ve been tracking fintech valuations (with the help of our investors!) to wonder if perhaps one doesn’t even need a working product these days to raise capital… It is super fun to watch, but also distracting! However, I told my team and our Board that I would feel much more comfortable with continuing to execute on our plan and focus on performance metrics for the next couple of months. And trust me, when I made that decision, I definitely had thoughts like “well, am I then an example of the fact that as a female founder I feel the need to prove myself harder than my male counterparts?” I prefer to think of it as laser focus.

What kind of strategies have you used to respond to diversity-related challenges?

InterPrice is full of people of different genders, cultures, locations, and nationalities. The most crucial step in encouraging a safe space around diversity is to stress the importance of people. Everyone has their own background, their own characteristics, and their own challenges that have led them to where they are now. If I don’t take time to connect and understand people for who they are -- their own diversity, then I will be unable to truly tackle any diversity-related challenge.

Given this, I have found that the most effective way to respond to diversity-related challenges is to hold an open discussion, where everyone is safe to share their thoughts and feelings, and where we can find common ground beyond our diversity. However, the key is to have existing trust within the team such that these discussions aren’t seen as lectures or “diversity training”. Because of our team culture, our open discussions about diversity are much more lively and actually kind of fun - there is this amazing balance between not taking each other too seriously and actually taking time to learn about each other.

Given the diversity statistics of the tech industry skewing towards predominantly white and male, what advice would you give to someone trying to get involved in the startup ecosystem that comes from a diverse background?

According to TechJury, only 37% of tech startups have at least one woman on the Board of Directors or as a C-Suite Executive. At InterPrice, I am grateful to have changed this narrative. With two women on the Board of Directors and two women in C-Suite executive positions, we have fought against the statistics to become a true woman-owned and women-led business. We have even gotten our official WBENC certification!

In a predominantly white and male led industry, coming from a diverse background makes it significantly more difficult to find equal career opportunities. My first piece of advice is to stay true to yourself. For example, I choose to be very open about the fact that spending time with my two kids is important to me - my team and my investors are all aware of that. They accept that in addition to running InterPrice, I am also a mother.

The second piece of advice is to be willing to work hard, and don’t expect opportunities to fall in your lap. In the tech space, I think having familiarity with some computer languages is tremendously helpful. This is particularly true in early-stage startups where there are definitely lots of situations where it is all hands on deck - it is incredibly valuable to have teammates that can help troubleshoot the code. I graduated with a minor in computer science and, as a banker, never had to use any of those skills until now - and it certainly saves everyone time and energy when I can look at the code to debug it versus always needing to ask developers for help.

And finally, seek out a mentor, who is able to understand you beyond your career. This industry is slowly diversifying, but change must start with you.

The Bowery Capital Team explores diversity in entrepreneurship. Throughout this blog series we will discuss with Founder/CEOs in our portfolio the impact diversity has had on their startups and careers. This week, Kate DeWald, Founder & CEO of Oncue joins us to share more about her experience.