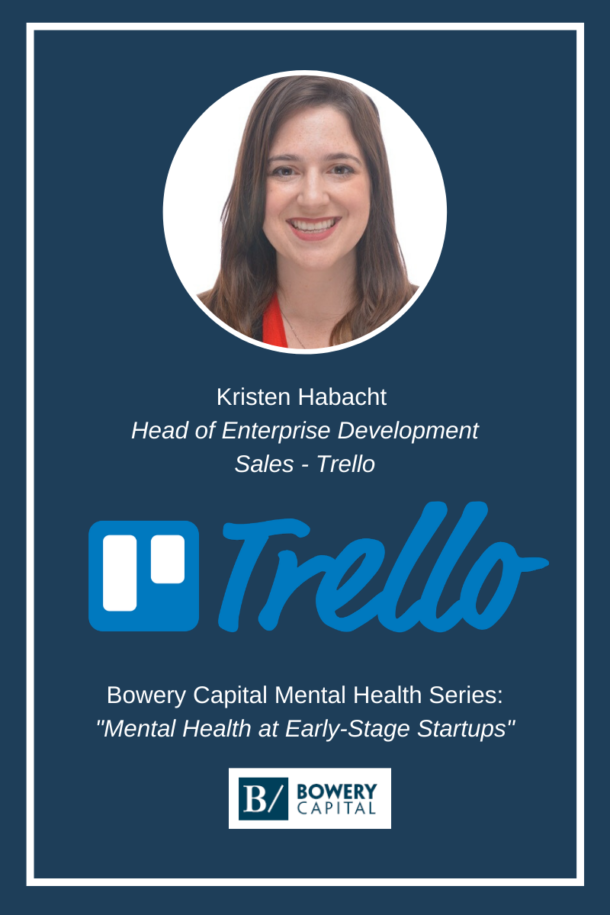 Welcome to our third installment in our series on mental health at early stage startups. Read our previous post here with Justin Welsh. For this post, we spoke with Kristen Habacht, Global Head of Enterprise Development Sales (previously VP of Sales) at Trello, about how sharing your journey can help with managing stress and mental health.

“The most important thing is to try and inspire people so that they can be great in whatever they want to do… Use your success, wealth and influence to put them in the best position to realize their own dreams and find their true purpose.”

It is easy to forget that your boss, mentor, or role model began their career in a role far below their current position. But when you think about it, we all had to start from somewhere and there are many paths to success, often filled with ups, downs, and several hurdles along the way. While career progression is a personal accolade in our work lives, it can often take a toll on our mental health. From experiencing a loss in expertise, to fear of soaring expectations, to potential feelings of imposter syndrome, the path to success is typically zig-zagged. The concept of storytelling and sharing your journey is often overlooked as a useful tool for proactively managing mental health. Could success feel more attainable if more people knew that there wasn’t a straight and narrow path to growing their careers?

Kristen Habacht got her start in sales in a rather non-traditional manner. Her first job out of college was an office administrator at a security startup that was quite far removed from sales. One of the advantages of working at a startup, however, was that the CEO noticed Kristen’s excellent work ethic and drive to succeed and offered her an opportunity to transfer to the sales team.

In addition to being excited about being in a sales role, Kristen was particularly attracted to the opportunity to have a real impact on the firm and a potentially outsized set of responsibilities as a result of the lean team. During her extensive career, she has found that one of the keys to managing mental health is sharing your journey with others and promoting that no two paths will be identical.

You would never guess from her resume but something Kirsten struggled with earlier in her career was a job that required an extremely long commute from her home in Connecticut to Manhattan, 2.5 hours each way. She left her home before the sun rose, and arrived back home after nightfall, only finding time with her family on the weekends. After maintaining this lifestyle for two years, it occurred to her that all of her discussions and relationships centered around work. She never unplugged as a result of her extreme commute that unsurprisingly left her with no time for other activities.

Upon recognizing the severity of the commute’s impact on her mental health and how it amplified the stressors she experienced in her job, Kristen realized the importance of distributing her energy into different activities. Dedicating time towards her passions such as community theatre and book clubs helped her alleviate the stress experienced in her day-to-day. As a result of her personal experiences, something Kristen really focuses on is role modeling by sharing her experiences with her team so they feel encouraged to develop and share their hobbies outside of the workplace.

Mental Health Management – Own Your Career

Work can easily start to creep up into other aspects of your life unknowingly. A call with Europe at 7 AM, a touchpoint with Asia at 10 PM. As these begin to compound, it can feel as though control of your life is slipping away, leading to feelings of stress and mental distress. Given her high drive to succeed, Kristen keenly felt this pressure as she stepped up to build her global team at Atlassian. Once she realized she was expecting twins, Kristen took the reigns of her schedule back into her own hands. Setting guardrails on her calendar and taking more vacations are some of the ways Kristen has been able to control her time.

For managers, it can be particularly important to show their team that it is okay to own their time and control their schedules. On a related note, the ability to own their own time can help alleviate feelings of imposter syndrome. In her experience, Kristen has had colleagues who have refused promotions resulting from a lack of confidence and belief in their ability to take the next step. Kirsten, however, strongly believes that taking control and steering your schedule can help boost confidence and alleviate mental health burdens.

Kristen highlights that, as a manager, sharing your journey is critical to demonstrate to other team members that success can be achieved through building their careers with their own unique paths.

Kristen’s top tip for managing mental health is to engage with your managers and proactively seek feedback. Feedback can often have a negative connotation because it requires us to be somewhat vulnerable to how others perceive us. It can, however, be helpful to realize that constructive feedback is a positive sign rather than negative as it reflects thoughtfulness and willingness to invest time and effort in the team member. On her part, Kristen believes that if she had been more proactive in seeking feedback, she would have accelerated her career by a few years.

It is important as well to ask for feedback in an appropriate manner that can be pointed in a specific direction. Asking for blank feedback gives managers no direction and doesn’t reflect proactive engagement. Kristen suggests asking more pointed questions such as how could they have performed better in a specific situation, what are some resources they could leverage to learn more, and could they sit in on additional meetings, etc.

August marked the end of the inaugural year of the Bowery Capital Sales Fellowship Program. After a very exciting summer, we’ve been able to take a step back and ruminate on the learnings and successes from the first year of the Program. Overall, we were very…

I’m often asked how to gauge if an SDR is going to be successful when they’re coming straight out of school or if they’re an industry changer and have no previous experience in a lead generation role. When you’re hiring AEs it’s easy… look at…

We’re thrilled to be kicking off the inaugural Bowery Capital Sales Fellowship Program this summer. The concept for the Program came about as I started to think about the lack of opportunities for recent grads to get into software sales. The software industry is a…