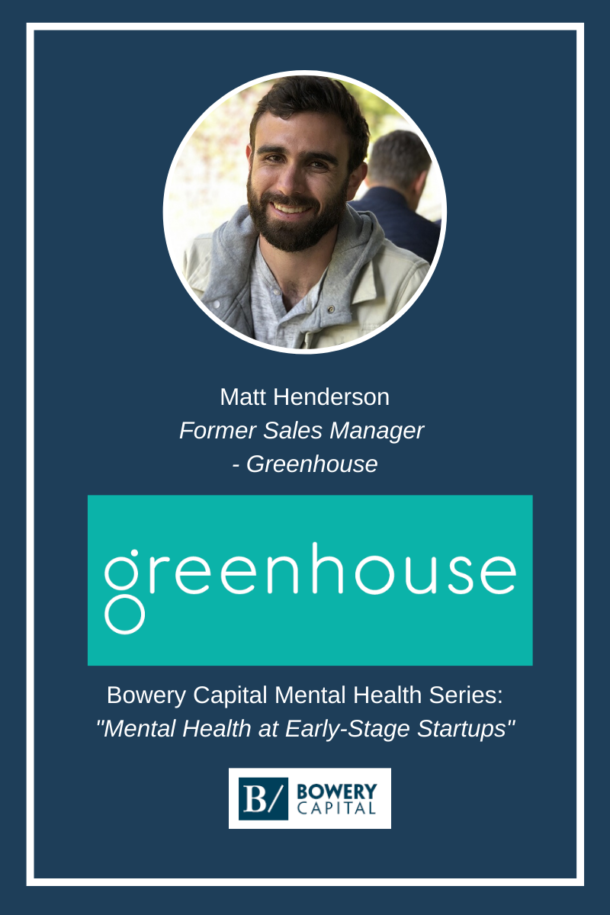 Welcome to our fourth installment in our series on mental health at early-stage startups. Read our previous post here with Kristen Habacht. For this post, we spoke with Matt Henderson, former Sales Manager at Greenhouse, about how unpacking expectations can help with managing stress and mental health.

“You were born to win, but to be a winner, you must plan to win, prepare to win, and expect to win.”

After coming off the wind of what’s been a particularly challenging but highly rewarding year, you settle in to celebrate your successes with some well-deserved rest and relaxation. You’ve pulled some long nights and looking back there were many times you weren’t quite sure if you were going to be able to pull those couple of deals over the line in time, but you did it! You’re exactly where you want to be and it was all worth it for this exact moment. But as they say, all good things come to an end and whether you’re coming back from time off with the family, exotic travels, returning from the holiday break, or back in the office post your best ever SKO, reality sets in with the next quarter/year’s goals and you can’t help but pause and wonder, will this ever get easier? With barely enough time to catch your breath, you’re on to the next grind and surprise, you’ve just found out that your quota has been raised and your comp plan isn’t changing. Sure, this was somewhat expected, but what is this number… How did they even land on this number, did they pull it out of the sky?

This is the reality often faced by successful sales professionals in their roles, particularly in early-stage startups. As revenue goals become loftier and sales teams are pushed to the very limits of their capabilities, the stressors on mental health can become even more taxing. Particularly when targets can feel arbitrary, there can be a loss of purpose and accomplishment. In Matt’s experience, unpacking expectations around these numbers can help significantly alleviate mental health stress.

Matt started his sales career at Amazon, engaging with SMBs through the Amazon platform. Though he really enjoyed the role and felt it was a fantastic introduction to sales, he admits it wasn’t the most engaging position. A typical 9 to 6 job, he clocked in, dialed between 100 and 150 numbers a day, and clocked out. By about 6 months in, he felt that he wasn’t in the best position to learn and grow, feeling more like a cog in a wheel than a key player. As Matt decided to explore new career possibilities, he felt particularly attracted to the startup culture. Specifically, he wanted to be part of a company where he could sit in the same room as the CEO and Co-founders and learn how they interacted with customers firsthand.

Matt dove into his search and methodically combed through companies. He had multiple conversations with folks in his network, and he was laser focused on finding a place that met his criteria and more. Given his limited early stage experience at the time, it was quite the journey and one that Matt eventually decided to give up on and reroute. A day after this decision, a mutual connection introduced him to Greenhouse and, serendipitously, it hit all of the marks. When they decided to give him a shot, he leapt at the opportunity following the wise words of Eric Schmidt, “when someone offers you a seat on a rocketship, you don’t ask which seat, you just get on board.” It was exactly what he had been searching for, and he buckled down with a renewed hunger to succeed.

One of Matt’s biggest challenges during his successful tenure at Greenhouse was after the first year they instituted formalized yearly quotas. He blew his number out of the water and was then tasked with an increased individual quota. Despite finishing the year strong, he couldn’t help but feel somewhat exhausted. He was basically back at square one, his work-life balance was nonexistent (although admittedly somewhat self-inflicted), and this did not help his feelings of being disconnected from decisions around his quota.

As he moved into a managerial role, however, Matt realized that these numbers are derived primarily from investor expectations and his VP of Sales relied on him to deliver on them. Understanding how a business operates, what the CEO is looking at, what investors are looking at, and unpacking expectations around sales targets helped Matt develop a more holistic view of how his sales efforts contributed to the company. He suggests that wherever possible, especially at an early stage startup, unpack expectations with your sales team. It can result in feeling an increased sense of ownership and understanding instead of feelings of anxiety and resentment.

It’s become an unfortunate modern phenomenon to brag about how little sleep we get as a result of our hard work. Long weeks at work in cities that don’t sleep, such as New York, can lead to big weekends as a way to blow off steam, starting as early as Thursday night. Matt shares that he had a reputation at Greenhouse, that no matter how late they were out, he was in the office at 7 AM the next day. While optically it came across as him showing up, it actually magnified the stressors of work.

A lot of founders emphasize how little sleep they can operate effectively on. While some people may require less sleep than the recommended 7-9 hours, striving to manage your schedule effectively can have a much more positive impact on your daily workflow. Matt suggests that prioritizing sleep and taking the time to map out your week can be a huge asset when it comes to productivity. While time spent sleeping may seem like it takes time away from work, it actually enhances productivity and gives you time back in the day.

One of Matt’s top tips for managing mental health is to focus on picking your battles rather than pursuing every possible opportunity. There is a time and a place to put your nose to the grindstone, but the reality is, most conversations and chasing can wait till the next morning. The majority of people don’t expect you to be on call at 10 PM. There may be a sort of badge of honor associated with signing a contract at 10 PM, but that’s not really conducive to your own long-term health. Yes, at a startup you need to grind and push, but use your best judgment; if working 24/7 doesn’t serve you or your company’s best interests, then reconsider giving yourself some guardrails, e.g. no emails on Saturdays so you can take some time to unplug and recharge.

Matt also suggests that having a mentor is extremely important to the mental aspect of sales. He believes that learning through someone else’s experience can empower you to be better equipped to navigate specific work/life balance challenges. While Matt has had several mentors by way of former managers, he more recently found that the best type of mentor for him is a life coach. While former managers know him really well and provide extremely helpful insight, their breadth of advice is narrowed by their perspective of him and could limit his ability to grow beyond their expectations. Having a life coach who is a third party to his work and life has proved to be a great outlet and as he returning to the workforce, Matt is planning to retain his as an ongoing resource. As an unbiased third party, a life coach can help with unpacking expectations from your managers as well.