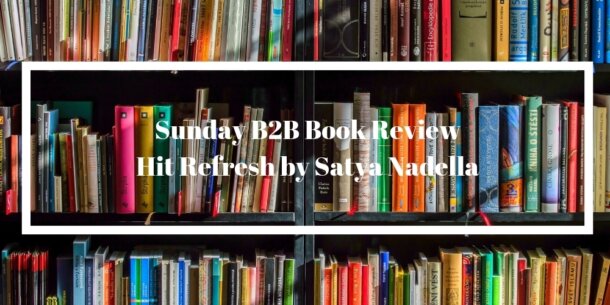 Another Sunday here at Bowery Capital means another book review. This week we feature a book review of Hit Refresh by Satya Nadella. Nadella is a household name to everyone who reads our blog and likely needs no introduction. He became the third CEO of Microsoft in 2014 and has done an incredible job moving Microsoft from a personal computing originator to a suite of best-in-class platforms and services for a mobile-first, cloud-first world. Why do a book review of Hit Refresh and Microsoft? Nadella is relevant to this community mostly due to his widespread accomplishments in a business hardware and software setting. One of Nadella’s greatest accomplishments was pioneering the “Cloud Computing” division (now Microsoft Azure). The annual business did $16.6B in 2011, when he was just appointed its head and in a matter of three years, the turnover saw a significant increase to around $20.6B mostly due to his changes. He ran Research & Development. He ran the Systems & Tools business within Microsoft. All in, he is a business-to-business practitioner and knows the ecosystem well.

We give the book a 4.5 out of 5.0. The book offers a great understanding of Nadella’s path to the CEO seat at Microsoft. He didn’t have any prior experience as a CEO and some of the lessons for emerging managers and executives are excellent. Readers get an inside look in how Microsoft is reinventing itself and also how Nadella brought Bill Gates back into the company in a more structured and active manner. Below were a few key takeaways from our book review of Hit Refresh.

1. Be Mindful Of The CEO Disease As Your Company Grows. Nadella talks a fair amount about personal stories and his own journey but one instance stuck with us. In companies that are transitioning (i.e. Microsoft) or growing quickly, it is often the case that when people have experienced great success, it goes to their head and makes them feel infallible. A major symptom of what Dr. Carol Dweck calls the “CEO Disease” is seen when a leader, due to pride or fear or failure, keeps repeating the same actions long after they have stopped working. Nadella keyed into this very early on in his tenure and gives some great advice to individuals around this concept. Becoming a learner goes a long way. Listening rather than talking helps too. Finally, engaging the entire organization in this learning was the best way Nadella solved some of the major issues happening at the time and limited his “CEO Disease.”

2. Trust Will Allow People To Build Their Own Escape Fire. There are a lot of book mentions within the work, but one really stood out to us. Nadella mentions the impact that Young Men & Fire by Norman Maclean had on him. The book is an extremely detailed account of the fire tragedy at Mann Gulch that happened in August 1949. The US Forest Service’s elite airborne firefighters, called The Smoke Jumpers, put together a crack team of 15 firefighters to control a forest fire. These Smoke Jumpers parachuted into the fire zone and only three of them survived the exercise after a 2 hours struggle with the fire. Fireman Wagner Dodge survived the fire by building an escape fire. He literally lit his own fire within the larger one that he was engulfed in, and then hid within the ashes and embers. None of his team members followed him. Nadella believes that Dodge did not build trust within the team and because his team did not trust him, Dodge could not convince his team members to build their own escape fire, and thus they perished in the fire. For Nadella, the counterintuitive escape fire equivalent in Microsoft was to shift the organization from the servers business that brought most of the revenue, to focus on the cloud business that had negligible revenue. Like Dodge, he knew he had the right knowledge to save people (Microsoft) but unlike Dodge, Nadella wanted to ensure that Microsoft employees understood the context of the need to switch to cloud, and trusted their leader. We won’t get into the details in our book review of Hit Refresh, but as you can guess he built a lot of trust within the organization and the teams followed.

3. Business Leaders Should Have More Sympathy & Openness. The book is a blueprint for business leaders seeking to understand Nadella’s management style, including his focus on empathy and continuous learning. He describes one of his more unpopular internal decisions, when he invited some lower-ranking leaders (whose companies had been acquired by Microsoft) to the annual retreat typically reserved for senior executives. It turned out well, but not without some culture shock for some top leaders. Most of the approaches that Nadella takes are very different from his predecessor Steve Ballmer who led with fire and competitive spirit. One of the bigger takeaways of our book review of Hit Refresh is that management often has different styles of ownership, leadership, and focus and there is really no singular way to do things..