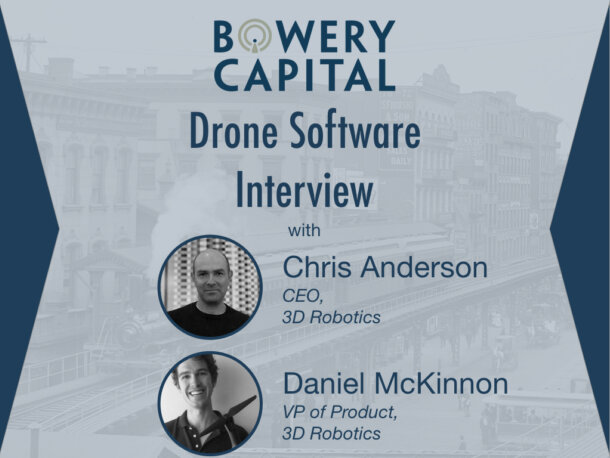 We at Bowery Capital released the 2016 edition of Opportunities In Vertical Software in November, which laid out our point of view on ten specific verticals and the potential for various software solutions to dominate each of these ten verticals in the coming years. For ten weeks, we have released content focused around the impact of software on these ten industries. We have done several interviews in weeks prior covering the Manufacturing, Agriculture, Logistics, Education, Legal, Restaurant, Insurance, and Construction verticals. For the drone software vertical we conducted a drone software interview with Chris Anderson & Daniel McKinnon. Chris Anderson is the CEO of 3D Robotics and founder of DIY Drones. Previously Chris was the Editor in Chief of Wired Magazine. Daniel McKinnon is the VP of Product at 3D Robotics. Prior to 3D Robotics, Daniel co-founded Agribotix, a drone-based remote sensing company.

What are some of the most interesting developments in your industry over the last 10 years and how has software added value?

Drone technology has been used in military applications since the 1940’s, but the commercial drone industry started to emerge over the last 10 years. Some of the key reasons for the emergence of drone adoption within the commercial sector were the decreasing technical cost that resulted from increased efficiency as well as the passing of new regulation; the passing of the FAA Part 107 rule requires only a few hours at an accredited FAA test center to pass the Part 107 exam and qualify for a commercial “Remote Pilot Airman Certificate.” Another important development has been increased awareness of the power of data that can be generated through drone technology. While drone itself may become commoditized, the data and insights generated are the key differentiator.

What are some of the challenges / hurdles that still exist?

Legal challenges have significantly decreased with the passing of new regulations, but at this point, the main challenges are around scale. With a larger fleet and more pilots, a commercial user can cover a wider area and perform multiple operations simultaneously, which requires significant investment and education. Many commercial users are at the early stages of learning the value of commercial drones on the worksite and the where “measuring the world” has value.

When looking to enable a process with software what are the most important points for a buyer to think through?

Several commercial users are currently using digitization technology. Looking specifically at construction, surveyors play an integral role but are too costly to have them constantly monitoring a site. Leveraging drone technology will allow site analysis at a much more frequent time interval and immediate data insight generation. Commercial users should similarly assess what processes on their work site or plant floor could be enhanced with more frequent monitoring at a lower cost. Commercial drone providers generally select a vertical of focus and build their software to cater to that specific vertical, so it is important for a buyer to assess how aligned the product development of a particular provider aligns to their specific use cases.

What is your vision for the industry in 5-10 years?

To date, we have been through several phases of development. We’ve seen the shift from military drone applications to consumer, and now the emergence of commercial use. The core focus moving forward will be around the evolution of data generated from drones. 3DR is currently focused on building several integrations with Autodesk to allow seamless data transfer into their engineering applications. The industry will start to shift focus beyond the drone itself towards digitization of the planet.

Thank you for reading this Drone software interview with Chris & Daniel. Make sure to check out the 1st Drone Deep Dive post discussing the History & Market Dynamics of Drone technology as well as the 2016 edition of Opportunities In Vertical Software for the full report.