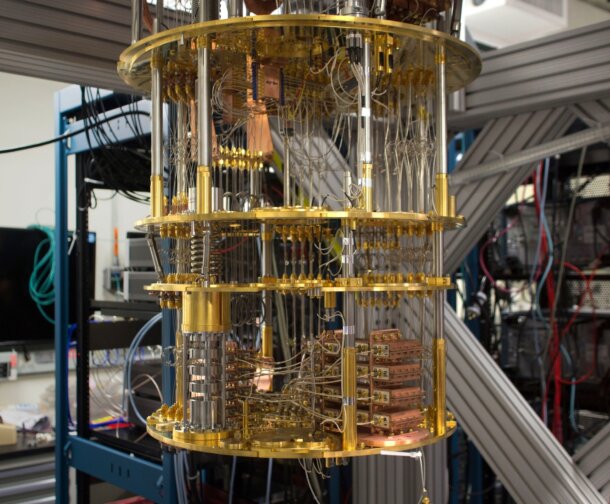 We spend a lot of time here at Bowery Capital thinking about the future. Quantum computers are one of the next technological revolutions, in our opinion, and we believe there are several industries quantum computing will redefine. This new, seemingly mystical, kind of computing promises to be as dramatic of an invention as the internet. By utilizing properties of subatomic atoms, qubits, the quantum equivalent of conventional bits, quantum computers are able to run processes in parallel and compared to classical computers, which perform tasks sequentially, can analyze big data and solve complex optimization problems significantly faster. In its conception back in 1980, quantum computing was nothing more than a theoretical idea, a fantastical “what if.” But in 2012, when David Wineland and Serge Haroche were awarded the Nobel Prize for quantum research the dream of quantum computing became a reality. Fast forward three years. In 2015, NASA presented a functional D-Wave Quantum computer, and since then the arrival of quantum has been all but guaranteed. The gravity of quantum computing is so great, it has been compared to the space race and while the time until commercialization of quantum computing remains uncertain, the anticipation surrounding this new technology has led to a countdown with its own dramatic notation,Y2Q, years to quantum. Below are some insights into industries quantum computing will redefine. Note that we believe these industries will see the most near-term change from quantum computers.

1. Quantum Computing Security. Mathematician Peter Shor demonstrated that quantum computers will have the ability to factor extremely large numbers efficiently. Why is this important? Large number factorization, because of its extreme computational intensity, is the foundation of much modern encryption. Quantum computing will effectively render all data protected by the current method of security vulnerable. One solution is quantum encoding. Known as QKD, Quantum Key Distribution will keep data safe in a post quantum world. By utilizing the laws of quantum physics, QKD’s can ensure a third party cannot intercept data. ID Quantique is an example of a quantum security startup and has already been acquired by SK Telecom. As the MIT Technology Review notes, fear sells, and paranoia about the threat of quantum decryption is creating a new industry for protection. In this market space, startups such as Post Quantum, ISARA, Qubitekk, EvolutionQ, KETS Quantum Security, and MagiQ Technologies are proliferating.

2. Financial Services. Many of the largest processors of data are players in the financial service industry. Technology and financial modeling software can contribute to the difference between simply achieving market returns, and superior returns. While classical computers can only search one file at a time or run a single monte carlo simulation of a portfolio, a quantum computer can perform these operations in parallel and suggest optimizing transactions much more quickly. Quantum computing has applications in risk analysis, dynamic portfolio optimization, pricing options and derivatives, and in many areas where algorithms currently rely on heuristics and restrictive assumptions. While using quantum computing on a mainstream level is still in the future, experimentation with its use has already begun. Using 1QBit’s Software Development Kit, an internal 1QBit research team has shown the ability quantum computing has on on optimizing arbitrage opportunities in the foreign exchange market.

3. Drug Development. Using quantum computers, chemists will be able to evaluate drugs on an individualized level. When developing drugs, chemists evaluate how molecules, proteins, and chemicals interact to test how patients will respond to the medication. Because of the large amount of variables to model, creating a new drug takes a consequential amount of time, money, and labor. The computational capabilities of quantum computers will allow pharmaceutical companies to use complex modeling that will facilitate developing new drugs and moving them to the trial stage more quickly and inexpensively. Sophisticating modeling will also allow greater individualization of new drugs to the user and more safe trials.

4. Transportation & Supply Chain. Another one of the industries quantum computing will redefine is the transportation and supply chain space. In March of 2017, Volkswagen completed their first research project using a quantum computer; the research used data from 10,000 cabs in Beijing to find the quickest routes to the airport, while also minimizing traffic experienced by others on the road. Using quantum computing, Volkswagen was able to optimize traffic patterns in under one second, whereas using classical computing would have taken nearly one hour. Quantum computing has the potential to change the way we move entirely, not only for traffic, but also for shipping and air traffic control. This technology allows for the possibility that continuous optimization may one day become a reality. With quantum computing the computationally intense Traveling Salesman Problem has met its match, and the ability to solve complex optimization problems quickly gives quantum computing many potential applications in supply chain management. Dynamic optimization will allow companies to quickly adapt to to both minor changes in conditions and major disruptions, and continuous optimization may become a reality.

5. Weather. By allowing for simultaneous processes, weather models can intake enormous amounts of data into quantum memory and process the data at a much faster rate than traditional computers. Quantum computers will be able to use NASA’s satellite imagery to find patterns that are too complex for classical computers and will give more accurate weather predictions. While this development may seem initially insignificant, weather has an enormous impact on a variety of industries including farming and transportation. Additionally, being able to forecast natural disasters further in the future will allow more time for people to get to safety, protect property, and allow supply chains to adapt to minimize disruption and support recovery after natural disasters. This is very clearly one of the industries quantum computing will redefine.