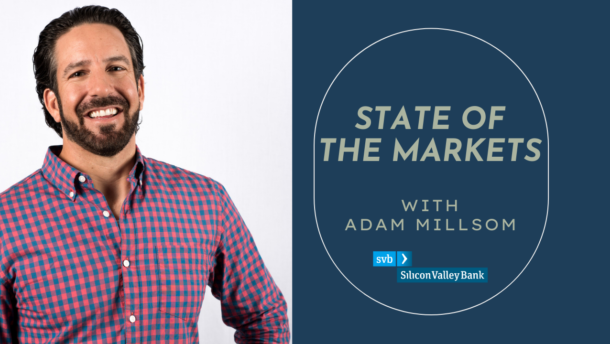 State Of The Markets with Adam Millsom (Silicon Valley Bank)

Silicon Valley Bank was out this past week with a "State of the Markets" report highlighting what has been going on thus far in 2022. You can check out the major insights here. The report highlights the latest trends for an innovation economy that reached new heights in 2021 with venture investment doubling to a record $333B. We thought it would be fun to bring our friend Adam Millsom on to the blog to discuss the report. Adam heads up Silicon Valley Bank’s Enterprise Software Team in New York City.

MB: You are mentioning this barbell where the Series A/B firms are sizing up and growing OR there is a case where folks stay the same size and develop some niche. Can you expand on some names where you are seeing this or comment further on it? Why do you think this is happening?

AM: The data suggested many of the mid-sized funds ($250MM to $750MM) and some early growth equity firms were getting squeezed out from the compression of traditional later state funds investing in companies earlier in their life cycles than ever before as well as early stage funds getting larger. The time between closing funds for the mega funds (+$1B) decreased from 2.8 years from 2018-2020 to 2.4 years in 2021, and the timing for fundraising for the mid-sized funds increased from 2.4 years to 2.9 years in this same period. The mega funds began investing earlier and traditional seed funds and even emerging manager funds got larger and many raised new structures like SPV’s or opportunities funds in order to continue to maintain ownership or continue to invest in their strongest companies over a longer period. As evidence the number of global seed funds that were greater than $250MM doubled from 4 in 2019 and 2020 to 8 in 2021. Examples are funds like 468 Capital, Greylock, Susa, Khosla all raised large seed funds in 2021. As a result, some mid-size funds did try to pivot towards a niche investment strategy, but again this is challenging when you compare it with an a16z who raised multiple funds within the same year. A16Z raised a $750B biotech fund (closed in Feb 2020), a $1.3B early stage fund, a $3.2B growth stage fund and finally a $400MM Seed stage fund.

MB: In the context of Seed funds and Seed fundraising can you expand on the data a bit and give us some ideas as to what is going on at this stage? A lot of our readers are running Seed funds or active at the Seed stage so curious what is happening there.

AM: Again, the influx of seed stage investments and increasing valuations at the seed stage was largely driven by the amount of dry powder and later stage investors moving further downstream. Seed stage companies had more fundraising options from seed investors, an increasing number of emerging managers, Corporate Ventures (CVCs) and even PE Firms and hedge funds looking to invest early in these companies and then again in the Series A to achieve the ownership they are looking for. FOMO is a very powerful driving force and thus it was not uncommon for us to see a company raise a large seed round and then raise a Series A in 6 to 8 months. But the data does not indicate that seed stage companies raised at less ARR, in fact the ARR increased a the seed stage and decreased at the Series A from the prior year.

MB: On Seed valuations, seems like the range has widened the most in the last 6 years and we are now at an average of $8MM pre-money but for the best they are raising at the Series A prices of old. We put out some Cendana Capital data a few weeks back which supports this. Why do you think there is such a huge range in seed stage valuations this year?

AM: I don’t want to sound like a broken record, but FOMO is a very powerful driving force. FOMO along with the later stage investors coming in earlier caused more competition. More competition drove higher valuations, particularly for the perceived high quality companies. The big valuations for the top quartile companies at relatively the same level of ARR indicates, that companies with the perceived highest potential were able to attract the largest valuation. Categories such as AI/ML or developer lead platforms were highly valued based on promise versus a company generating more ARR than in years past. Another factor is given the competition/compression is we are seeing traditional seed investors go even earlier as well so the data could be capturing pre-seed rounds with institutional investor participation which were previously non-institutional “friends and family” rounds. Some seed investors have pivoted their strategy to get to get to know key engineers or other employees that they think might eventually start their own company and are investing in them pre- product, let alone product market fit. The data could also be capturing multiple seed rounds which could explain higher valuations.

MB: Seems like enterprise M&A is down this year through Q3. Do you think this is mostly due to the healthy IPO market and interest rates or something else? What is the view going into 2022 on M&A in SaaS? Do you think a lot of of the slower growth SaaS players get "orphaned" or bought out because they can't keep up with the best in class grouping?

AM: I think there were a number of factors that contributed to M&A being down in 2021. First there was a white hot IPO market which including SPACs which had been almost non-existent in previous years. Then the amount of dry powder in the system which was in part created by very low interest rates and thus investors had few options besides investing in public equities and private tech markets. Companies didn’t need to sell because of the liquidity options. Another interesting factor when COVID first hit, there was an assumption that there would be some sort of recession and many companies would need to sell, however, this turned out not to be the case as valuations for technology companies sky rocketed. The net result was would be acquirers had to pay a lot more for acquisition targets. In terms of SaaS companies, we still think this is a great category and the revenue model is the most efficient way to sell into corporates an thus we remain bullish. I don’t necessarily think these companies will get orphaned, but it’s likely exists will be less than may had hoped for with the increased valuations of the last several years. This is definitely an interesting trend to watch as there are now more than 900 unicorns and only a handful of companies valued at or more than $1bn are acquired each year. Many of these companies might need to slow their growth and/or find ways to operate more efficiently until the environment becomes favorable again. For this reason, the public market recalibration is going to have a bigger effect on late stage companies that early stage. We have recently heard of instances in which terms were re-traded during late stage equity financings.

MB: What do you think is the market outlook into Q4 and 2022? Obviously the Q4 data will likely be similar to Q3 here, but what is your view as it relates to the SaaS grouping for 2022?

AM: The fundamentals for the innovation economy and enterprise software companies are still incredibly strong and there is still an abundance of dry powder, however, we don’t expect to see quite the same unbridled growth we experienced in 2021. There are some are challenges ahead that are contributing uncertainty in the markets such as raising interest rates, underperforming 2021 IPO’s, supply chain bottlenecks, geopolitical events, mid-term elections, etc. All of these can all have a cooling effect on the tech ecosystem. Thus, we anticipate a year of fewer IPO’s which will likely lead to the private secondary markets rising in popularity as well as an increase in M&A as shareholders look for liquidity that came from the public markets or PE exists in 2021. Although many public SaaS companies have seen incredible declines in their market cap, we are incredibly bullish on the category. Its rare to come across an enterprise software company that is not a SaaS model or moving to a SaaS model. In a slowing economy, corporate buyers might evaluate their purchasing needs in order to determine mission critical purchases versus nice to have applications with more scrutiny, however, the fact remains corporates will still to purchase enterprise software applications for their businesses. We anticipate cybersecurity, AI&ML, API Management, cloud Infrastructure, data processing and dev ops to be the top categories in 2022.