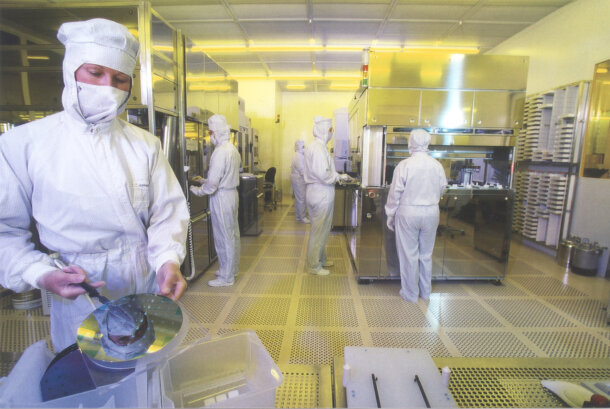 Impacts Of AI Nationalism On Semiconductors

1. Nationalistic Trade Wars Generally Drive Intense Volatility. AI Nationalism has already involved itself in corporate activity in the semiconductor industry. Semiconductors are one of the most interdependent industries with China importing 29% of its semiconductors from overseas, including from places like the U.S. As China and the U.S. pledged not to back down, the trade war could have had widespread ramifications on the semiconductor industry. Major U.S. semiconductor manufacturers such as Qualcomm and Broadcom have over 50% exposure to China. As trade war fears intensified, Qorvo, Skyworks, and Qualcomm all experienced nearly 15% decrease in their stock prices over March in to April. This can be attributed to their extremely high rate of exposure to China, and the fact that the US Trade Representative continues to investigate China’s IP practices with respect to semiconductors. While the trade wars appear to be on hold as of the time of this writing, you still could see increased volatility if this heats back up again.

2. Self Reliance Appears To Be The Main Idea Of Countries Like China. As AI Nationalism gets more and more isolationist the challenge becomes what to do if you are a country that is reliant on someone else for your computing power. If you are China, you make chip development a key plank of your capability and build internal to your country. According to its Made in China 2025 drive to bolster its strength in technology against more developed rivals in the United States, Japan and Europe, the government wants local chips to make up at least 40% of China’s semiconductor needs by the middle of the next decade. Closing the quality gap with U.S. chipmakers has become a matter of urgency in Beijing at this point and where this ultimately goes is likely going to be self reliance. In this respect the impacts of AI nationalism on semiconductors will likely be most profound as companies decide to “build versus buy.”

3. Semiconductor Isolationism Plays Into The Alliances Of AI Nationalism. The U.S. government has demonstrated clear involvement in both AI and semiconductor industries. According to Reuters, the United States may start scrutinizing partnerships between American and Chinese companies in Artificial Intelligence. Further, the US government has blocked the acquisition of major semiconductor company Qualcomm by Broadcom which is now dead in the water. As countries become increasingly entangled in their domestic AI and semiconductor industries, it is important to note the global interdependence of these industries. When America and China engage in trade war like policies with respect to semiconductors, this pulls in Japan, South Korea, and Taiwan, who are also heavily involved in the technological supply chain. These national policies have very international consequences, and importantly not all countries have the capacities or resources to engage in AI nationalism. Instead, it is likely that major AI national players may drive alliances with other countries involved in supporting their research and semiconductor demands. The formation of alliances involved with AI Nationalism will only be furthered with the added effects of semiconductor isolationism.

It is important note how IT hardware and semiconductor industries shadow shifts in digital IT spend in advancing fields such as cloud computing and artificial intelligence. This same relationship will be important observe especially in the context of AI nationalism. The volatility and tension with government involvement in semiconductors is not distinct, but a critical component of the rise of AI Nationalism. As countries aim to become increasingly self-reliant with their semiconductor needs, the same countries make decisions with global ramifications on the highly interdependent semiconductor industry. As semiconductor demand grows exponentially, fueled largely by adoption of AI, AI Nationalism will likely shape the emergence of a new semiconductor isolationism.