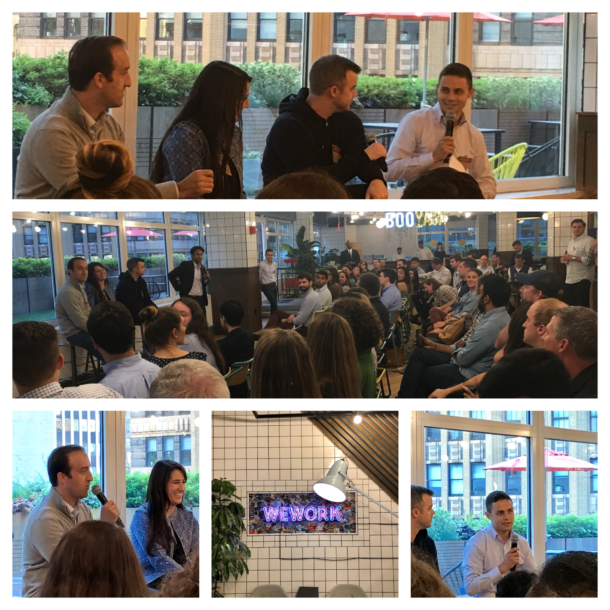 Notes From The Boston College Tech Panel On AI

Last night we had the opportunity to take part in the Boston College Tech Panel on AI which focused on “Preparing for the Future of Artificial Intelligence”. The event was put on by BCTEC (Boston College Technology & Entrepreneurship Council), a group whose goal is to bring together members of the technology & entrepreneurship community to learn more about a certain subject matter on the rise. Panelists Mike Brown, Managing Partner of Bowery Capital, Clara de Soto, co-founder of Reply.ai, and Matt Provo, founder and CEO of Gram Labs, discussed the future of AI development, modern day applications, and workforce disruptions. Neeraj Prathipati kicked off the night by highlighting the work BCTEC has done over the past year to increase engagement in tech and entrepreneurship with discussions around Blockchain, Women in Tech, and more. After his remarks, Andrew Oddo, Director of Growth at Bowery Capital, led the panel discussion.

The event focused predominantly on the role AI will play in disrupting legacy businesses, the impact AI will have on jobs, the competitive forces from tech giants who have already built out AI offerings, and bold predictions on AI development over the next five years. As many who read this blog know, we have extensive posts on AI Nationalism and AI Policy across different countries, including in the US. This event furthered the discussion on the potential of AI and provided thoughtful insights from influential leaders on the future of AI. Below are a few interesting themes from the Boston College Tech Panel on AI last night.

1. Manufacturing And Transportation Sectors Are Some Of The Ripest For AI Technologies. Artificial intelligence is technology that can perform pattern recognition and computations at or exceeding human levels, with raw data often being the fuel for the AI machine. Industries such as manufacturing, oil and gas, and transportation have enormous amounts of structured and unstructured data that provide opportunities for AI to come in and improve upon current processes. Oftentimes, processing around much of this data is also manual, or data is lost entirely, and AI is particularly beneficial when that is the case. Due to the specific nature of each industry, Mike Brown commented that he believes that single industry (vertical) AI companies will be more successful at using AI to solve business problems and will develop faster given their narrow focus around a specific data set and problem.

2. Some Jobs Will Be Lost To AI, But Many May Be Gained. Industries in which many jobs contain task-oriented processes are at risk of AI automation. As mentioned above, manufacturing and transportation are key industries where humans will have a tough time keeping up with AI in the future. For example, one of Bowery Capital’s portfolio companies, Fero Labs, can provide quality control measurements for machines in manufacturing facilities with little human involvement. Clara used the analogue of when automobiles overtook horses as the major mode of transportation. She reflected that, society fretted that jobs like that of a blacksmith would be lost, but the creation of a new mode of transportation created more job opportunities than were lost, and an entirely new industry crystallized too. That said, the group did acknowledge that jobs will still be displaced which will be troublesome for many. Re-education of these displaced employees is an effort that entrepreneurs should support. Matt and Andrew commented on an idea some groups have brought up around creating an extra tax for AI companies, with the proceeds earmarked for educational programs on tech for displaced employees. The group agreed that one key to ensuring a smooth transition is to focus on empowerment instead of replacement in the near term.

3. Big Tech Players Are Assisting The Advancement Of AI, And Causing Challenges Too. Startups working with AI have a love-hate relationship with the major tech players. Many of these firms have provided open source software, which has allowed startups to get off the ground prior to coding their own AI products. For example, Google has provided an open source Natural Language Processor (NLP) software which has allowed companies working on text or voice AI to create a baseline product prior to major investment into their own proprietary technology. The group highlighted the fact that significant tech players have also dedicated large marketing budgets towards promoting AI, and that “all ships rise with the tide” as a result of their effort to convince the greater public to trust AI. On the other hand, some of the major tech firms are making bold claims about what their AI-powered products can do, leaving the customers that choose to work with them underwhelmed and potentially unconvinced of today’s promised capabilities for AI applications.

4. Predictions For The Next 5 Years. To finish the Boston College Tech Panel on AI, panelists were asked for a bold prediction on where they think AI will take the world in 5 years. One answer to this question was that there will be a major advancement in e-learning in combination with AI, which will spur an increase in continued education of digital employees in the workplace and a reduction in student debt. Mike’s view on this topic is that, at the pace we are going, China will overtake the US in AI dominance within the next 5-7 years and that in 5 years we will be very close to solving, if not have solved, the autonomous vehicle conundrum.

The discussion on the potential of AI is ever increasing. We were excited to be a part of the Boston College Tech Panel on AI and to spend time with everyone who is interested in AI. If you liked “Notes From The Boston College Tech Panel On AI” and want to read more content from the Bowery Capital Team, check out other relevant posts from the Bowery Capital Blog. Special thanks to Eric Herzfeld and Nour Jedidi for their contribution and work on this post.