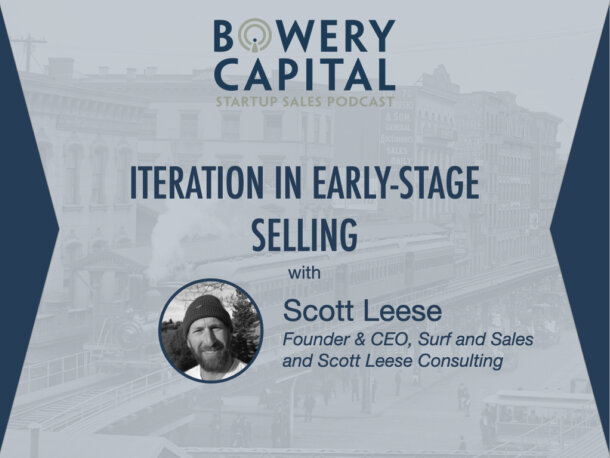 This week we had Scott Leese, Founder and CEO of Surf and Sales and Scott Lease Consulting, join us on the Bowery podcast to talk about “Iteration in Early-Stage Selling.”

Here are some of the main questions and ideas we discussed in the podcast:

1. Why is it important to “be iterative” in your early selling motion?

2. What are the different signals you listen/look for that indicate you may need to focus here or there for your next round of iteration?

3. When it comes to iterating thoughtfully, how do you think about the balance between moving on when something isn’t working, but also not pulling the plug on something too soon before you have adequate data?

4. Diving a bit deeper along those same lines – when you’re first testing out a cold outbound cadence and aren’t seeing the results you expected, how do you start peeling back the different components to see which parts to iterate and what to keep?

5. What about other elements of the GTM playbook – are there other methods, strategies, or frameworks you’ve seen to be effective at really narrowing in on what’s working and what isn’t?

6. What are some actionable tactics for leveraging early prospects and champions to iterate and optimize various elements of your GTM strategy?

7. Can you share some of your best practices when it comes to iterating on a sales process itself?

8. Let’s talk about the relationship between sales and product. Do you have any tips for how to crack that code and identify what the real problem is – is the way you’re selling the product the issue or is it the product itself and its ability to attract customers that is the core problem?

9. What’s your opinion on outsourcing part of your GTM strategy as an early stage company – say using an outsourced SDR firm – when you’re struggling to get prospects into the top of your funnel? Have you found that this can speed up the iteration process or does it instead slow it down because you’re now one-step removed from the feedback loop?

10. What’s one thing you wish you had known starting out that would have saved yourself a lot of time and headaches?

Big thank you to Scott for coming on the podcast and sharing his insights with us!

Scott Leese is a 3x American Association of Inside Sales Professionals Top 25 Award Winner, and is currently the Founder & CEO of Surf & Sales and Scott Leese Consulting, where he primarily focuses on helping SaaS startups scale from $0 – $25m ARR. Previously, Scott was the SVP Sales at Qualia and OutboundEngine. Before that, Scott was the VP Sales at Main Street Hub. He lives in Austin, Texas, with his wife, Janet; their two sons, Brayden and Caleb; and the family dogs, Loki and Mia.