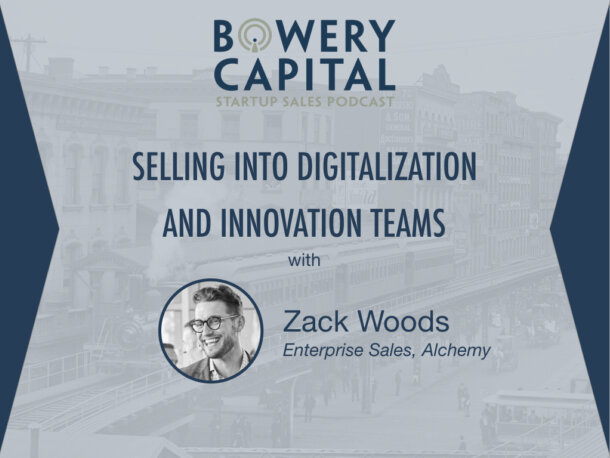 This week we were joined by Zack Woods, Head of Enterprise Sales of Alchemy, to break down selling into digitalization and innovation teams.

Zack talks about how to think about leveraging the digitalization team even if they aren’t your Economic Buyer (which they likely aren’t). One important point to keep in mind is that at least one senior executive likely put their name, reputation, and budget behind creating a digitalization or innovation team. Uncovering who that person is internally can help you as you multi-thread and look for your forward-thinking champion(s) inside a large organization. Ultimately, these teams vary greatly between companies so do your homework and think of selling into digitalization and innovation teams as a single arrow in your holistic sales quiver. They might be an ICP, but they shouldn’t be your only ICP.

After a legal internship gone wrong during the aftermath of 2008’s housing crisis, Zack had a revelation: creating unique business ideas was far more attractive than responding to legal memos. He has since worked in a variety of functions, geographies and languages, first with Evonik Industries, one of the world’s largest, most innovative material science firms. Since 2019, he has been “on the other side of the desk”, helping build the GTM motion and leading enterprise sales for Alchemy Cloud, a SaaS company helping material science and specialty chemical companies leverage the power of IT to bring products to market faster than ever before.