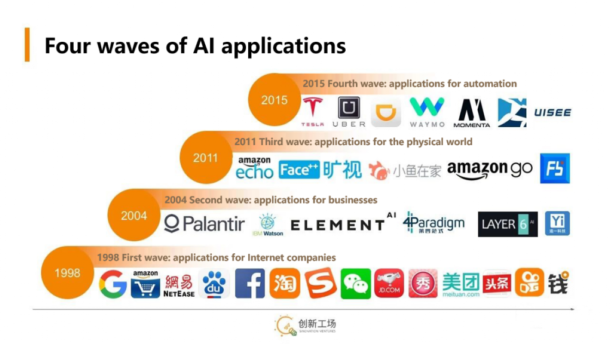 The Four Waves Of AI

As many folks who read our blog are well aware, we have been interested and invested in companies focused on AI for some time now. We write about the topic a fair amount and earlier this year covered some thinking about policy implications as AI continues to grow in scope and importance nationally and internationally. One of the most interesting books to come out recently on the topic is Kai-Fu Lee’s AI Superpowers. The book devotes a lot of time to the “AI arms race” as well as some perspective on China and the U.S. as it relates to the topic. Ka-Fu Lee is one of the foremost VCs and technology executives in China and formerly ran various pieces of China for Google, Apple, and Microsoft. In the book, he lays out a wonderful framework for how to think about AI capabilities, deployment, and advancement over a five year period. He showcases a point of view on where each country is at having spent extensive time in both regions and likely talking to policymakers, companies, and others. He calls it The Four Waves of AI.

1. The First Wave: Internet AI. In this first stage of The Four Waves of AI, the world is mostly dealing with recommendation engines. These are broadly defined as algorithmic systems that learn from masses of user data to curate online content personalized to each individual. One of the more interesting companies mentioned is Toutiao. The business started as a copycat of Buzzfeed and boasts almost 120 million daily active users through a viral content and recommendation engine AI. No humans. The business is worth $20B which is 10x the value of Buzzfeed. Currently, Kai-Fu Lee estimates that Chinese and American companies stand head-to-head when it comes to deployment of Internet AI. But given China’s data advantage, he predicts that Chinese tech giants will have a slight lead (60-40) over their U.S. counterparts in the next five years.

2. The Second Wave: Business AI. In this second stage of The Four Waves of AI, business AI uses the data that traditional companies have already labeled historically and creates enormous leverage for a modern corporation. Think banks issuing loans via AI, hospitals archiving diagnoses via AI, imaging data on your scans being read by AI, courts noting conviction history, recidivism, and flight via AI. The book profiles Smart Finance, a Chinese financial services company that built an AI-powered app for microfinance that depends almost exclusively on its algorithms to make millions of micro-loans. China’s mobile payment spending outnumbers that of Americans’ by a ratio of 50 to 1 so it is no surprise that this is another large business. In business AI the U.S. outperforms China by a great margin but Lee predicts that in the next five years China will make up some ground (30-70) with the U.S. still having a commanding lead.

3. The Third Wave: Perception AI. In this wave, AI will move into the sensor ecosystem, merging the digital world with our physical environments. As sensors and smart devices proliferate through our homes and cities, we are on the verge of entering a trillion-sensor economy. Imagine walking into a grocery store, scanning your face to pull up your most common purchases, and then picking up a virtual assistant shopping cart. Having pre-loaded your data, the cart adjusts your usual grocery list with voice input, reminds you to get your spouse’s favorite wine for an upcoming anniversary, and guides you through a personalized store route. One KFC restaurant in China has already teamed up with Alipay (Alibaba’s mobile payments platform) to pioneer a “pay-with-your-face” feature which is incredible. Given China’s hardware advantage, the country currently has a 60-40 edge over its American tech counterparts and that will only increase in the coming years to 80-20.

4. The Fourth Wave: Autonomous AI. Building off of the first three waves, the fourth wave will integrate everything and give machines the ability to sense and respond to the world around them, enabling AI to move and act productively. Think swarms of drones that can selectively spray and harvest entire farms with computer vision and remarkable dexterity, heat-resistant drones that can put out forest fires 100x more efficiently than a smokejumper, or Level 5 autonomous vehicles that navigate smart roads and traffic systems all on their own. We’ve heard about this future, but it will take time and effort to become a reality. Kai-Fu Lee currently puts America in a commanding lead (90-10) in autonomous AI but Chinese government efforts are quickly ramping up the competition where this will be a 50-50 split in the next five years.

It is interesting to hear this perspective on The Four Waves of AI from one of the worlds foremost experts on the topic. What becomes of this ecosystem we still do not know but Kai-Fu Lee certainly gives us some window into what the future may hold.