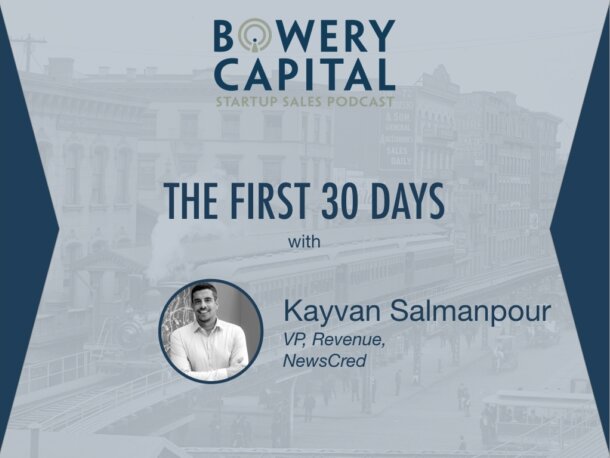 This week we had Kayvan Salmanpour into the studio to talk about “The First 30 Days” and what he did as a sales leader coming into NewsCred. Kayvan was employee #3 and brought a rare blend of being both a seller as well as a sales manager and formerly was an entrepreneur who founded his own company called Media Planet.

Our friend Mark Roberge at Hubspot talks a lot about what qualities you want in your first sales hire and Kayvan is probably the best example of the perfect person to have given his entrepreneurial background and founder of his own company. He did a lot in the first 30 days, selling the first 5 deals, hiring in the initial sales team, and then running that team to ultimately build the initial trajectory of the business to where it is today. He is now the VP of International and focused on growing the business around the globe.

“The first 30 days are a balance between immediate revenue generation to keep your job but also building in the foundation you need for the company to succeed.” -Kayvan Salmanpour

In our podcast we talk a lot about the very beginnings of NewsCred on the sales side and what Kayvan brought to the table when he was hired into NewsCred.

We then cover how he handled the psyche and dream of the founders and really managed them appropriately so that the relationship and expectations were grounded and successful. Next we move on to literally the first 5 things that Kayvan did when coming into the role in the first 30 days. Things like recording the founders pitch, transcribing, and distilling it down into a sales playbook as well as running vertical market audits to showcase what sectors and segments NewsCred might have been missing.

Kayvan’s always up for sharing and this podcast is rich with real world tips and tricks that he’s learned through the years. Give a listen and don’t forget to write a review on iTunes for us as we continue to grow!

This week we had Melanie Hallenbeck, Chief Growth Officer at Elevate.inc join the Bowery Capital Startup Sales Podcast to discuss selling as an early stage startup and how to build a team-winning mentality.