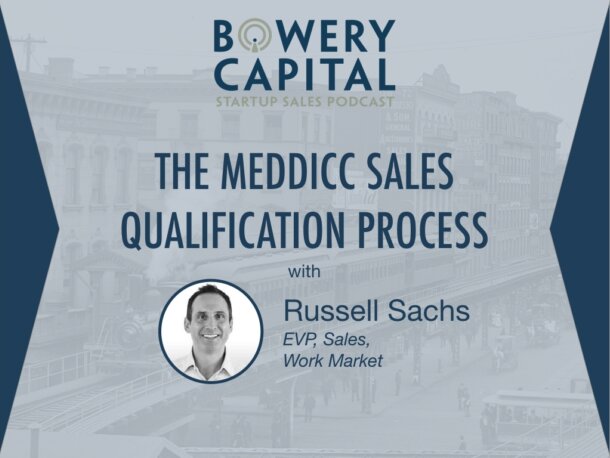 We’re six weeks in and hope you’ll consider subscribing to our podcast! This week we had Russell Sachs into Bowery Capital for the sixth edition of the Bowery Capital Startup Sales Podcast. Russell has long been a sales leader in the NY community and is currently the EVP of Sales at Work Market. We sat down with him to walk through “The MEDDICC Sales Qualification Process.” MEDDIC in this case is an acronym that stands for Money, Economic buyer, Decision process, Decision criteria, Identify pain, Champion, and Competition. Back in his early selling days at MessageOne, he learned the process from an old boss and it stuck with him as a teaching tool in every company he’s been with since.

For those that do not know, the principles of the MEDDICC acronym are generally know as the holy grail of sales qualification and widely used today by many of the best SaaS companies. The MEDDICC acronym was originally developed at Parametric Technology Corporation (PTC) by the sales development team of Richard Dunkel and Jack Napoli. Why should you care? After the sales team adopted the MEDDICC qualification process, sales grew from $300MM to $1B and PTC met or exceeded every quarters revenue target for 20 quarters in a row. Richard and Jack continue to teach the MEDDICC framework today and while there are a lot of sales methodologies out there, MEDDICC has survived the test of time and continues to be widely used.

In our podcast Russell talks about where he learned the MEDDICC process and how he implements it at Work Market, how emerging SaaS companies should think about this framework to force analytical rigor, and what to do when MEDDICC is working and what to do when it is not working. Following the high level discussion, we dive into each component of the MEDDICC framework and Russell gives real world stories and thoughts on each component as well as tips and tricks that he’s learned over his 10+ years using the framework. Give it a listen!

This week we had Melanie Hallenbeck, Chief Growth Officer at Elevate.inc join the Bowery Capital Startup Sales Podcast to discuss selling as an early stage startup and how to build a team-winning mentality.