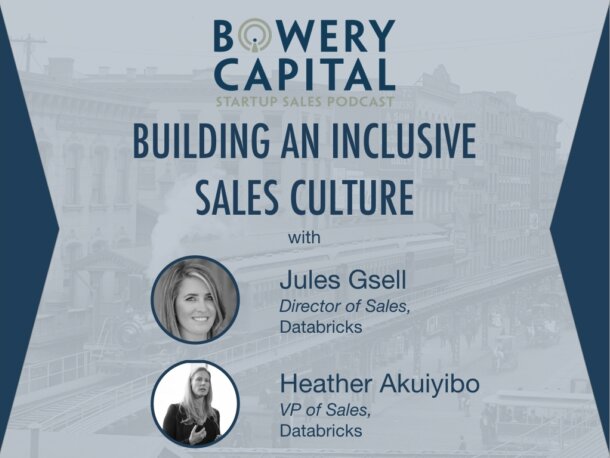 This week, the Bowery Capital team hosted Jules Gsell, Director of Sales, and Heather Akuiyibo, VP of Sales, at Databricks to discuss “Building An Inclusive Sales Culture.” Databricks is a platform that streamlines data science and engineering for businesses. It provides a unified analytics platform, creating efficient workflows that make building and managing data products easier. Databricks has raised over $247MM from investors such as Andreessen Horowitz and Battery Ventures.

Jules Gsell joined the Databricks team after working at box for eight years. At box, Jules served as Director of Enterprise Sales after being hired as its first SDR. There, she was responsible for building the company’s qualification and distribution process. Prior to that, she was an Account Executive for The Mercury News. Jules graduated with a B.A. in Applied Science from California Polytechnic State University in 2007.

Heather Akuiyibo joined Databricks after serving as Director of Corporate Sales at Zendesk for five years. Prior to Zendesk, she was a Director at Bloomspot. Heather also worked for Google as a manager for online sales and operations, executing both ad sales and high-tech sales. She graduated with a degree in Urban Studies and Psychology from Stanford University in 1999.

In today’s podcast, Jules and Heather discuss the importance of forming team values, hiring diverse talent, and cultivating a culture of collaboration. According to them, building an inclusive sales culture starts with hiring. Before onboarding a potential candidate, it’s important for the team to communicate what its concept of inclusivity is and what skills, personality set, and values it’s looking for in a teammate. To help evaluate a candidate’s fit, it’s also good practice for the hiring committee to frequently interact with candidates in a non-interview setting. Jules and Heather also speak about conducting outbound prospecting to look for diverse candidates that can contribute valuable skills and perspectives to the team.

Heather and Jules also point out that maintaining an inclusive team culture is just as critical as building it. According to Jules, a key factor behind a great team is fostering communication and collaboration between coworkers. This includes building bridges between different functions of a sales team and allowing SDRs and AEs to commingle on a daily basis. When encountering a situation that is toxic to the team’s culture, Heather and Jules stress that clear, direct, and timely communication is important to mitigating the issue. They also emphasize that it’s important for leaders to reach out to remote workers and spend time with their team. Overall, Heather and Jules believe an inclusive and positive team culture depends on a considerate hiring process, strong communication and collaboration, and a clear set of team values and expectations.

We’ve come a long way since our first episode of Bowery Capital Startup Sales Podcast in October 2014. We think it’s a good idea to look back and pick the top sales podcasts for you to revisit. Here are the top 5 sales podcasts out…

5 Ways to Get the Most Out of Your Sales Script

Selling a new product is hard – a lot of times, you’ll do anything in your power to close the deal. This is great at a small, scrappy startup where there is maybe one salesperson selling along with the CEO. As your company prepares to…

Sales Operations is a role tasked with measuring and understanding the performance of a company’s sales team. Last week, Emmanuelle Skala (head of sales at Influitive) explained in an episode of the Bowery Capital Startup Sales Podcast that Sales Ops should have 2 core aims: (1)…