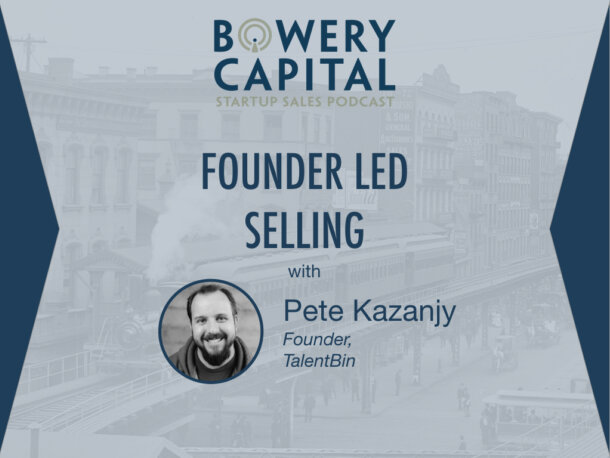 This week we were back in the studio after the holiday weekend with our good friend Pete Kazanjy of TalentBin to discuss the concept of “Founder Led Selling.” Pete and I have been discussing this concept for some time now and we thought it best to have him come on to the show and talk about how early-stage software founders can win with sales. Pete was formerly the Founder of TalentBin, a category-defining talent search engine and recruiting CRM that sold to Monster in 2014. Since then he has been heavily involved in the software sales ecosystem coaching the next generation of founders. Right now he is writing a book called Founding Sales which is the “missing manual” on early stage sales for founders and other first-time sales staff. In addition, he is the man behind the popular Modern Sales Salon which is a 1,000+ member, invite-only, peer learning

In our podcast, Pete discusses the high level concept of founder led selling and how to really understand the gap between having your MVP ready to go and hiring a salesperson to then sell it. This gap is obviously filled by founder led selling but Pete dives in on a specific structure that he created that any founder can use to their advantage. We walk through this structure and each component of it in detail in our chat. First, Pete talks at a high level about the basics of customer development. Second, he moves to product marketing and messaging which is a topic less covered but absolutely necessary for success with founder led selling. Pete talks about some of the pitfalls that founders get into within this component of founder led selling and talks about ways to avoid them. We also cover a lot of the basics of customer development, ICP, and making commercial arguments in this part of our discussion. Third, Pete talks us through the process of actually going out and discussing the product in market and making the commercial arguments and doing demos on behalf of your product. We close on some interesting tips and tricks that can be helpful to anyone as they think about founder led selling. While passing the baton to a sales hire can sometimes have short term gain to your SaaS company, Pete lays out a very compelling and correct argument as to why founders need to focus on selling themselves early on.