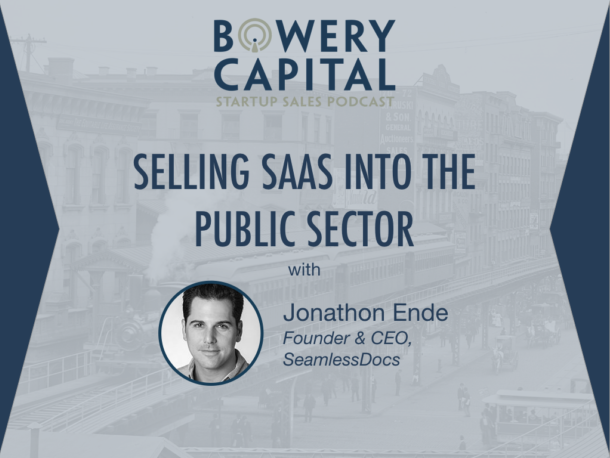 This week, the Bowery Capital team hosted Jonathon Ende, Founder & CEO at SeamlessDocs, to discuss “Public Sector SaaS: Selling Into Government.” SeamlessDocs’ public sector SaaS platform helps government clients not only digitize their existing forms, but also process and track them. The company aims to be “the future of government forms,” bringing modern, intuitive user experience to the government-citizen interface. Though perhaps not the sexiest market, the opportunity is massive: US federal & state budgets alone exceed $10 Trillion. Unlike many software companies that sell into government today, SeamlessDocs is 100% focused on the public sector vertical. Jonathon, therefore, has embraced the idiosyncracies of selling into government, seeing them as potential moats rather than challenges to be avoided.

Think how often you personally face agony over DMV appointments or jury summons. Attaching a service cost to all of those incidents, then multiplying by a 9-figure factor (applicable citizen-users) makes clear the scale & ubiquity of the problem SeamlessDocs is solving. And the buyers are there: efficient, paperless, user-friendly citizen interaction would mean billions in cost savings for under-resourced governments. Jonathon founded SeamlessDocs in 2011 alongside CTO Chaci Camejo. Today, SeamlessDocs employs over 40 FTEs, operating largely out of its New York City headquarters. Customers range from the State of New Jersey to the City of Los Angeles. Since founding, the business has raised ~$17MM in venture financing from Seed through a Series B approximately a year ago, from Motorola Solutions, Govtech Fund, and others.

In today’s episode, Jonathon will walk us through his framework for successful sales in public sector SaaS. Selling into government isn’t a simple prospect. As many horizontal players who have dipped their toes into government prospects know, budgets can be opaque, sales cycles can be long, and existing systems are often a nightmare. Jonathon and I discuss the realities of public sector SaaS sales today. In short, it may not be as bad as you think. That said, it takes a deep understanding of your customer universe, and Ideal Customer Profile within it, to build credibility early in these sales processes. As Jonathan details, there are absolutely buyer champions out there in government. Ensure your public sector SaaS solution (and sales team) is truly understands prospects’ issues, concerns and limitations, and you can activate them. We cover topics such as: sales strategies, lead qualification, sales team organization, sales team education, and other topics uniquely germane to public sector SaaS.

Jonathon Ende is the Founder & CEO at SeamlessDocs, a role he has held since founding the business in 2011. Prior to SeamlessDocs, Jonathon was the co-founder of The Alley, a technology share space here in NYC. Jonathon served as CEO to two companies even earlier in his career, including LegalLogix, the first business he founded, back in 2010. Few modern, sales-oriented SaaS CEOs client (and prospect) bases are 100% government / public sector; Jonathon, however, is that rare find, making him a perfect guide to today’s podcast topic. Happy listening!

This week we had Wendy Gonzalez, CEO of Sama, join the Bowery Capital Startup Sales Podcast to discuss "Convincing Prospects to Buy vs. Build."